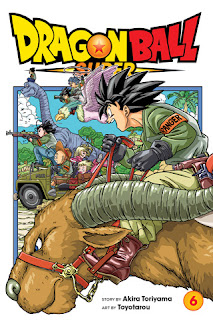 Dragon Ball was a long-running Japanese manga series written and illustrated by Akira Toriyama.  It was originally serialized in Weekly Shonen Jump from 1984 to 1995 and was comprised of 519 individual chapters.  The hero of Dragon Ball was Son Goku, and the series began with the story of his childhood.

Dragon Ball Super is a sequel to the Dragon Ball manga and to the “Dragon Ball Z” anime series.  This sequel is set several months after Goku's victory that brought peace back to Earth.  Goku and his friends must defend Earth, this time from fighters from other universes and timelines.

As Dragon Ball Super, Vol. 6 (Chapters 29 to 32; entitled “The Super Warriors Gather!”) opens, the “Zen Exhibition Match” between the “Gods of Destruction” comes to an end.  And the Lords of Everything are bored, so they change some rules.  Now, the “Tournament of Power” will only feature mortals, and gods are forbidden.

Each universe that competes must field ten warriors, which means that Goku and friends have to recruit Universe 7's mightiest warriors.  But they must win because the universes that lose will face complete destruction.

THE LOWDOWN:  Because of a scattering of review copies I received, I became an occasional reader of the Dragon Ball manga.  I do enjoy reading the manga, and the Dragon Ball Super manga is a nice fresh start for new readers... at least I think so.

Dragon Ball Super Graphic Novel Volume 6 follows the changes that began with Vol. 2.  This saw the series move on from its original premise – the fight between Universes 6 and 7 – to this current battle of the universes.  After several volumes dealing with Goku and company's epic battle against the multi-universal villains, Zamas and Goku Black (which ended in the middle of Vol. 5), Toriyama and Toyotarou move readers deeper into the “Tournament of Power” story line.

Vol. 6 may be the volume that I have enjoyed the most.  It is mostly battle manga and some comedy-drama about the gathering of warriors.  It promises much battle manga fun to come, so I'll keep reading... and recommending this to you, dear readers, who happen to be Dragon Ball fans.

Posted by Leroy Douresseaux at 4:15 PM