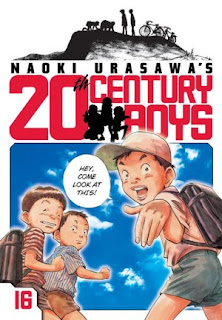 20th Century Boys is a science fiction adventure series from famed manga creator, Naoki Urasawa. The story begins with Kenji Endo, a hardworking and honorable young man who runs his family’s small business (a convenience store). In 1997, Kenji discovers a series of ominous incidents that follow “The Book of Prophecy,” a ridiculous scenario Kenji and his friend made up as children in the early 1970s.

A bizarre religious cult called the Friends and their leader, the “Friend,” are behind a plot that leads to December 31, 2000. Called “Bloody New Year’s Eve,” this day sees the world brought to the brink of destruction. Fourteen years later, Neo Tokyo is a thriving multiethnic metropolis until the Friends ruin it and the world.

Naoki Urasawa’s 20th Century Boys, Vol. 16 (entitled Beyond the Looking Glass) opens on a flashback as we see pivotal moments from Kenji and his pals’ childhood. However, they are seen from the point of view of the boy who would become the Friend.

Then, the narrative moves forward to the third year of the Friendship Era. A killer virus has decimated the world’s population. Tokyo has been quarantined behind a giant wall patrolled by the Friend’s secret police and the Global Defense Forces. The story focuses on Tokyo teens, Sanae and her brother, Katsuo. They have given shelter to an injured man who hides in a shack near their home, and his name is Otcho AKA Shogun.

I’ve long since run out of words to praise manga creator Naoki Urasawa. I love his intricate plots, and 20th Century Boys is like a warehouse of intricate plots and is a veritable subplot-o-rama. I assume that there are many ideas about why Urasawa’s storytelling is so successfully spellbinding I tend to think (cause I’ve changed my mind a few times about this) that 20th Century Boys, like his other comics, is successful because of Urasawa’s ability to make every character with a speaking role – from smallest to largest – relevant in the reader’s eyes. Not every character contributes something that is momentous, but that contribution is relatively important to the time in which he or she contributes it or perhaps, to a past or future moment. And this manga still jumps off the page like a summer potboiler.

A+
Posted by Leroy Douresseaux at 8:29 AM