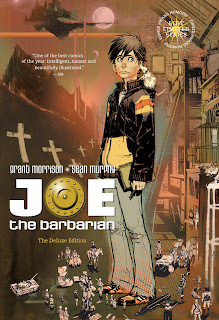 Sean Gordon Murphy is the New Hampshire-born, Brooklyn-based animator and comic book artist best known for his work with DC Comics, including the Batman/Scarecrow: Year One miniseries and Hellbazer. He has also had work published by Dark Horse Comics and Oni Press. I mention Murphy because he is ready to be a star. He should be a star, and a new hardcover comics collection testifies to that.

Joe the Barbarian is an eight-issue miniseries created and written by Grant Morrison and drawn by Sean Murphy with colors by Dave Stewart. Published during 2010 (cover date March 2010 to March 2011) by Vertigo, the DC Comics imprint, the series blended both high and epic fantasy with quest fantasy, sword-and-sorcery, and juvenile fiction. Vertigo recently published Joe the Barbarian: The Deluxe Edition, a hardcover book which collects all eight issues of the series with supplemental material (script sample, sketches, script breakdowns, art progression, etc.)

The title character of the series is Joseph “Joe” Manson, Jr., a teenage boy with Type 1 diabetes. When his blood sugar drops, Joe enters a state of hypoglycemia, which means the glucose content in his blood is abnormally low. When he is hypoglycemic, Joe begins to hallucinate, and his mind imagines a fantasy world that is actually based on the design and floor plan of his house. This world is populated by his toys and other fantasy characters (superheroes like Superman and Batman, knights, dwarves, and also a Transformer-like toy, among others). One of the characters is an anthropomorphic rat named “Chakk,” a warrior/paladin that is the fantasy version of Joe’s pet white rate, Jack.

Alone in his house during a lightning storm, Joe enters a state of hypoglycemia, and the hallways and doorways of his big, dark house become vast kingdoms, mist-shrouded landscapes, and sinister gateways. And Joe is now the Dying Boy. He is the one legends claim will restore the Light and overthrow King Death, the one who wants to cover the world in darkness and turn the living into the dead. Joe is confused as to whether he is really a hero, or just in need of a soda to stop a series of hallucinations. Still, he must complete some kind of quest or his first adventure will be his last. Either way, Chakk/Jack is by his side.

As with much of Grant Morrison’s comic book work, Joe the Barbarian is not lacking in imagination and inventiveness. Even with its Tolkien-esque qualities, Morrison’s clever and inspired flourishes (such as how the house’s infrastructure shapes Joe’s hallucinations) stand apart as unusual. Still, as a whole, this series is like empty calories because there isn’t much substantive or mentally nutritious like… say… The Invisibles. Even as a metaphor, Joe the Barbarian doesn’t resonate, as it doesn’t have much worth grappling with metaphorically. There are some interesting set pieces and some ingenious panels here and there. Yes, Joe the Barbarian is entertaining, but that’s about it.

If I have to say that something in Joe the Barbarian blew my mind, I would say that it is the art of Sean Murphy. The compositions surpass Morrison’s ideas in terms of imagination, because, visually, Murphy’s drawings are what give Joe the Barbarian the feel that the story is a “flight of fancy” with consequence and significance. In addition, Murphy’s sustained high level of draftsmanship over eight issues is only surpassed by Jim Lee when considering comic books published by DC Comics and Marvel Comics.

Over time, trade collections of this series will undoubtedly attract readers because Joe the Barbarian is a brainchild of Grant Morrison. The art and the supplemental material, however, make Joe the Barbarian: The Deluxe Edition a portfolio of and showcase for the art of Sean Murphy.

Posted by Leroy Douresseaux at 5:35 AM