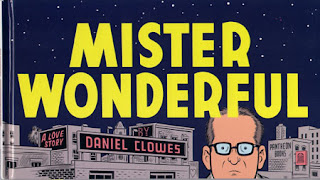 The New York Times Magazine is a Sunday magazine supplement included with the Sunday edition of The New York Times. Beginning in September 2005, the magazine began a literary section called “The Funny Pages.” One part of “The Funny Pages” is “the Strip,” which is essentially a comics section. Here, some of the top names in alternative comics, like Jaime Hernandez, Megan Kelso, Seth, and Chris Ware, among others, would offer multi-part stories serialized over several months (thus far, from four to 7 months).

Mister Wonderful is a comics serial created by Daniel Clowes and published from September 2007 to February 2008. Dan Clowes modified and expanded Mister Wonderful, and earlier this year (April 2011), Pantheon Books published it as a hardcover color graphic novel entitled Mister Wonderful: A Love Story (at a size of 6” x 11.2” which is similar to books that reprint newspaper comic strips).

The title, Mister Wonderful, refers to the story’s central character, Marshall, a divorced, middle-aged man out on a blind date. Marshall is a loner and is also in financial distress, neither of which is helped by his occasional flaring temper. As the story opens, Marshall is waiting for his blind date, a 39-year-old woman named Natalie. As the minutes tick by, Marshall imagines himself as being on the date that will change his life. Will this date be the one that lets him be a dashing, heroic type, a “Mister Wonderful?” He may be more right than he imagines, but is this rather unconventional fellow up to the task?

Mister Wonderful is completely about Marshall. Clowes tells the story (except for a few odd moments) as a first-person narrative, so readers who cannot engage Marshall will likely dislike the story. Natalie is really a supporting player, and she isn’t so much a character as she is a caricature, cipher, or type.

Marshall, in a sense, is also a type – a Dan Clowes type. Marshall is the self-absorbed, loser-in-distress. He doesn’t think that he is better than anyone else; he simply thinks that getting to know other people, for the most part, doesn’t add value to the rest of his life. In one way, Marshall is largely an enigma, but Clowes is delving into Marshall’s soul; he’s focusing on the parts of Marshall’s personality that will come forward to address the nerve-racking experience – a date. And Marshall has been dateless for six years or so. I can’t help but think that if we knew if Marshall had engaged in sexual intercourse in the time since his marriage dissolved that it would tell us a lot more about him.

Truthfully, what I like about this book is what I like about Clowes work. It is his ability to take oddball contrarians and make them so interesting, engaging, and even alluring. After reading Mister Wonderful, I realized that I watched the story of a loser who transforms into a lovable loser as he finally won something, in spite of himself and in spite of what others may think of him. Even when it seems like life is beating him down, Marshall is going to win. It’s a wonderful life, indeed.

Posted by Leroy Douresseaux at 8:49 AM