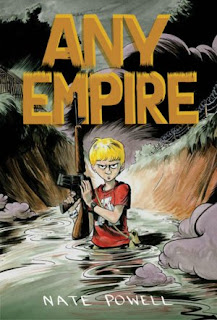 Nate Powell is the Arkansas-born, now Bloomington, Indiana-based illustrator and graphic novelist known for his self-publishing and DIY musical efforts. His 2008 original hardcover graphic novel, Swallow Me Whole, won an Eisner Award in 2009 in the category of “Best Original Graphic Novel.” 2011 saw the release of a new hardcover original graphic novel, Any Empire, which according to the publisher, Top Shelf Productions, “examines war and violence, and their trickle-down effects on middle America.”

Any Empire’s lead character is Lee Powell, a small-town, middle school kid. Lee is often lost in violent fantasy scenarios – most of which involve characters from G.I. Joe: A Real American Hero. Sullen and withdrawn, Lee can also be inquisitive and friendly, which causes his parents (including his father who is an officer in the United States Air Force) some concern.

Lee’s friend is Donnie Purdy, who simply goes by “Purdy,” a boy who is even more sullen than Lee. In fact, Purdy’s attachment to violent scenarios is downright visceral compared to Lee’s musings of consequence-free violence. Purdy is attached to twin brothers, Matt and Mark, little bullies with a penchant for animal abuse. When a series of turtle mutilations comes to light, a local girl named Sarah plays Nancy Drew to catch the culprits. Eventually, Lee, Purdy, and Sarah separate, but their dark histories of violence collide and reunite them in adulthood.

Nate Powell doesn’t necessarily dig deeply into the characters of Any Empire. What he does is delve into the role of violence in their lives, and violence is the dominant theme. Woven into the fabric of Any Empire is violence between children, violence against animals, the depiction of violent and dark emotions that people feel towards others, the insidious nature of violent entertainment aimed at children, and the all-obliterating violence of war between nations and states.

One thing that a reader can get from this graphic novel is that characters don’t just resort to violence; it’s also the tool of choice in their work box. This narrative, however, is not without a ray of hope. There is a scene late in the story that runs for two pages and part of a third page, in which Lee and his father grapple with war and violence. Papa Powell says something that is not said often enough – at least not in a meaningful way (as he does) – in my (fake) humble opinion.

I remain impressed by the way Powell’s compositional technique creates black and white art that shimmers on the page the way black and white Film Noir glistens on the screen. His quicksilver graphical storytelling dances across the pages and reaffirms that the simplicity of black and white art combined with lettering and word balloons can be as transfixing as any color comic book created with software. With Any Empire, Nate Powell assures his place as a great American graphic novelist.

Posted by Leroy Douresseaux at 8:07 AM