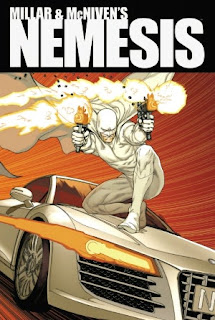 Nemesis is a creator-owned title that Marvel Comics published in 2010 under its Icon imprint. The four issues are collected in a hardcover volume entitled, Millar & McNiven’s Nemesis. This book has a dust jacket and includes Millar’s afterword from Nemesis #1, the variant covers from all four issues (including a cool one by Millar), a script-to-art comparison, and advertisements for two other Millar comic book projects (Superior and Kick-Ass 2).

The series focuses on two characters. The first is a Batman-like character, called “Nemesis,” who uses his skills, resources, wealth, and whatever super powers and abilities he has for evil rather than for good. Nemesis is very much like the Heath Ledger Joker in Christopher Nolan’s Batman movie, The Dark Knight (2008). What if a cool billionaire with all those planes, cars and gadgets, put on a mask and waged war on the forces of law and order, Millar asks.

The second character is Nemesis’ target and opponent, Chief Blake Morrow, the Chief of Police of Washington D.C. He is like Clint Eastwood’s “Dirty Harry” Callahan and Bruce Willis’ John McClane (from the Die Hard movies) blended into Commissioner James Gordon from the Batman comics. Plus, he is a staunch, conservative (pro-life, anti-gay) Catholic.

The story depicts Nemesis’ campaign against D.C. as part of a bid to be the winner in a small war he is waging against Morrow. Nemesis’ reign of terror leaves untold numbers of civilians dead and creates collateral damage (mostly among Morrow’s family, friends, and coworkers). Morrow believes Nemesis is seeking revenge against him because the villain claims to be Matthew Anderson, the only child of a couple whose depraved crimes where revealed by Morrow. As he gets closer to Nemesis, however, Morrow wonders what is true and what is just gamesmanship when it comes to Nemesis, the world’s only super-criminal.

I love a great villain – from Iago to Hannibal Lector: the conniving, brilliant, and/or genius types. I rooted for Heath Ledger’s Joker in The Dark Knight, and it is hard not to love the X-Men’s Magneto.

Nemesis features a criminal genius and super-villain whose arrogance is as alluring as it is hilarious. In a series that offers some pretty deranged scenes, Nemesis’ best moments have the villain killing cops and other law enforcement and authority types. I don’t see Nemesis as a guilty pleasure or sinful delight because I don’t feel guilty about loving it so much, although if I am honest, perhaps it is a sin to take such delight in the depiction of cops getting killed by the dozens.

Millar paints the characters in broad strokes throughout the series, but the sharp dialogue makes them likeable, nonetheless. Steve McNiven’s art, from the standpoint of style, is acceptable, though it makes me wonder why he is so acclaimed. However, McNiven’s storytelling and page design are why this story is an action-packed page-turner that is tense even where there isn’t brutal action splashed across the page.

I read Millar & McNiven’s Nemesis in one sitting, flipping pages as if my life depended upon it. My life doesn’t depend on a sequel, but my life would be better in those moments when I’m reading a sequel.

Posted by Leroy Douresseaux at 10:50 AM