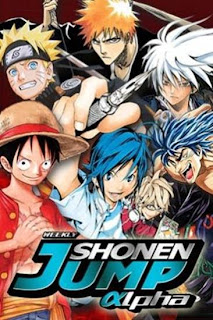 New Weekly Manga Anthology Launches In January 2012 And Offers Unprecedented Near Simultaneous U.S./Japanese Release Of Some Of The World’s Most Popular Manga Titles

VIZ Media gives fans and readers a taste of what’s to come from the new WEEKLY SHONEN JUMP ALPHA (WEEKLY SJ ALPHA), a serial digital manga anthology launching on January 30th, 2012 that will feature some of the most popular manga series in the world and offer near simultaneous release of these titles in the U.S. and Japan. The company has revealed the cover for the first issue, which will be available initially through VIZManga.com and the VIZ Manga apps for iPhone®, iPod® touch, and iPad®.

The first cover for the new brand features the main characters from all six series featured in WEEKLY SJ ALPHA, including Naruto from NARUTO, Ichigo from BLEACH, Luffy of ONE PIECE, Rikuo of NURA: RISE OF THE YOKAI CLAN, Moritaka Mashiro and Akito Takagi of BAKUMAN｡, and gourmet hunter Toriko of TORIKO.
Each new digital issue of WEEKLY SJ ALPHA will bring manga fans in North America the latest chapters of their favorite series only two weeks after they debut in Japan’s massively popular WEEKLY SHONEN JUMP magazine. WEEKLY SJ ALPHA will be made available through an annual membership that provides 52 weeks of access to 48 weekly issues for just $25.99. Single issues of WEEKLY SJ ALPHA can be read for a four weeks for only $0.99. Each issue, once received on one device, can be read on all other enabled devices through the easy-to-use integrated VIZ Manga platform which includes the VIZ Manga Apps for iPad, iPhone, and iPod touch as well as VIZManga.com.

For more information on WEEKLY SJ ALPHA and exclusive subscriber offers, please visit ShonenJump.viz.com or VIZManga.com.
Posted by Leroy Douresseaux at 10:36 AM