I Reads You Review: AVENGING SPIDER-MAN #1 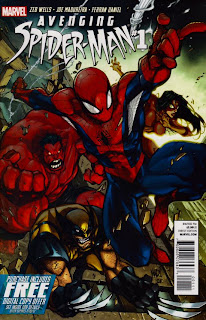 The star creators to start this are writer Zeb Wells (a star?) and artist Joe Madureira (still a star, but likely not as bright as he was back in the 90s). The team-up joins Spider-Man and the Red Hulk.

As Avenging Spider-Man #1 opens, Spider-Man and his Avenger teammates are battling A.I.M. and a giant A.I.M.Bot. Meanwhile, New York City Mayor J. Jonah Jameson has just shot the starter pistol to begin the New York City Marathon. The marathoners, however, immediately find their progress impeded by an invasion of diminutive yellow monsters. Hopping a ride to NYC on the back of the Red Hulk, Spider-Man finds himself arriving just in time to lose to the invaders – even with the Hulk’s help?!

Back in the mid-1990s, penciller Joe Madureira (also known as Joe Mad) and inker Tim Townsend formed one of the best (if not the best) art teams working in superhero comics. Maduriera’s anime and manga influenced style were transformed into solid comic book art by Townsend, an inker with a master illustrator’s touch. Madureira’s art did not suffer much when he left Marvel for Wildstorm Productions and Image Comics to produce his creator-owned title, Battle Chasers (published under Wildstorm’s Cliffhanger imprint). By the beginning of the 21st century, however, Madureira had left comics to work in the video game industry.

Joe Mad returned to comics in 2007 for The Ultimates 3 from Marvel Comics, but his art was no longer inked by Townsend or inked at all for that matter. Now, Madureira’s art was colored directly from the pencils. For me, it left much to be desired. As best as I can tell, Madureira’s is producing the art for Avenging Spider-Man the same as he did for The Ultimates.

It is not that I think Mad’s art here isn’t good. I do think that compared to the work he did on Uncanny X-Men with Townsend inking, this Avenging Spider-Man art is inferior, at least in terms of style and draftsmanship. However, I still admire Mad’s compositional and design skills. Some other artists may stretch out stories with splash pages or pages composed of big panels simply because those pages are more attractive to sell as original art. Mad uses splash pages and big panels to create a heightened sense of the dramatic or convey the power of action, force, movement, etc. The way Mad positions characters and objects in panels and the “camera” angles he uses reflect what Stan Lee preached in his How to Draw Comics the Marvel Way (co-authored with John Buscema).

As for the story: it’s mediocre. I’m amazed that Marvel and DC Comics can still get away with producing remarkably mediocre material, the kind of toad burger product that would spell doom for a publisher not financed by a multi-national media corporation. I’m surprised at the mediocrity because I remember when Zeb Wells first showed up on the comics scene; he was supposed to be some kind of golden boy. Is that golden as in piss gold?

My grade reflects my still-alive love of Joe Mad, but the grade should be lower because of the story.

[This comic book includes a preview of Avengers: X-Sanction #1 by Jeph Loeb and Ed McGuinness.]

P.S. I’m going to buy a copy of Avengers: X-Sanction #1 just to rag on it. The five pages that are previewed here are just lousy. I’d really be disappointed if it turned out to be good, thus denying me some fun.
Posted by Leroy Douresseaux at 10:12 AM