I Reads You Review: ULTIMATE SPIDER-MAN #4 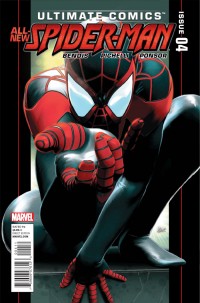 Like Parker, Miles was bitten (just recently) by a spider and the result is arachnid-like powers. After witnessing the death of hero, Miles can no longer ignore his strange new powers. With the help of his best friend, Ganke, Miles is ready to suit up, even if everyone else isn’t ready for the new (Spider) kid in town.

This fourth issue of the new Ultimate Spider-Man series is a nice change of pace as writer Brian Michael Bendis has Miles deal with things new to him – the responsibility that having powers brings, the how-to of being a superhero, and the difficulty of replacing a legend. So far, Bendis is gradually revealing Miles to us, but he is also delving into the African-American teen, as if Miles were also new to him.

The art by Sara Pichelli features a clean, almost classical line work. It’s the wonky coloring that sometimes distorts that cleanness. Colorist Justin Ponsor over does it on the gradation when he doesn’t have to. There are times when Ponsor wants to suggest light reflected off Miles’ face, and it instead resembles an albino-like skin condition.

[This comic book includes a preview of Avengers: X-Sanction #1 by Jeph Loeb and Ed McGuinness.]
Posted by Leroy Douresseaux at 11:36 AM