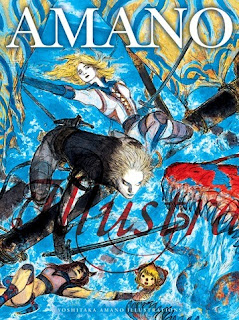 Born in 1952 in Shizuoka Prefecture,Yoshitaka Amano is a Japanese artist, character designer, and illustrator.  He is a scenic designer for live theater and film and a costume designer.  Amano first came into prominence in 1967 as a 15-year-old working for Tatsunoko Production, first working on the anime adaptation of Speed Racer.  He later became the creator of such iconic and influential characters as Gatchaman (Battle of the Planets) and Honeybee Hutch, to name a few.

In the 1980s, Amano soared to fame for his work on covers and interior illustrations for books, the most famous example of such work being his cover and illustrations for author Hideyuki Kikuchi's book series, Vampire Hunter D.  In 1987, Amano began his association with the Final Fantasy video game by designing characters and visual concepts.  Some American readers may know Amano for working with author Neil Gaiman on the award-winning illustrated book, The Sandman: The Dream Hunters.

Now, VIZ Media celebrates the remarkable career of this famed artist with a new art book, Yoshitaka Amano: Illustrations.  This 8.5” x 11” softcover volume (which has an illustrated dust jacket) is an overview and survey of Amano's career.  This book includes several color illustrations from Amano's work on Final Fantasy covering a period of just over two decades.  Fans of Vampire Hunter D will delight over the eight pages of paintings, illustrations, and studies from the famed vampire media franchise.  There are also several pages of Amano's illustrations and art for other book series.

Yoshitaka Amano: Illustrations also includes the transcript of a conversation between Amano and graphic artist Akira Uno, who once worked with Amano as an art director.  There is a 10-page section featuring Amano's sketches of men and women, and also several pages of anime character designs, fine art, and other work.

I have to say that Yoshitaka Amano: Illustrations is a beautifully designed book, but it would have to be because of its subject matter.  Amano's work is so beautiful, colorful, imaginative, and just damn gorgeous; how could a book about him afford to be unpretty?  So the people who put Yoshitaka Amano: Illustrations created a colorful and color-infused book that is befitting of an incredible artist, illustrator, and designer.

I must say that I am disappointed that there are no examples of Amano's early work on Speed Racer, nor are their any examples of Amano's work with Neil Gaiman on The Sandman.  The truth is that even this beautiful volume cannot capture the enormity of a talent like Yoshitaka Amano, nor the expanse of his output.  So, yeah, Yoshitaka Amano: Illustrations is a vivid teaser of a survey and overview that will encourage you the reader to go out and look for more.  I do want more.  Once again, VIZ Media has published a fantastic, high-quality art book.

Posted by Leroy Douresseaux at 7:44 AM