Review: TALES OF THE BATMAN:Carmine Infantino 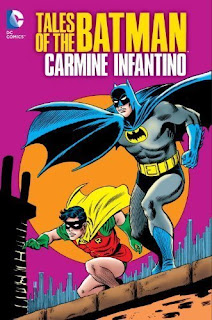 Carmine Infantino (1925 – 2013) was an American comic book creator who worked as an artist and as an editor.  He began working in comic books in 1942 and was best known for his association with DC Comics, where he was a comic book cover artist, interior story artist, character designer, and editor.

Infantino was a major force during what is known as the “Silver Age” of American comics book.  In 1956, Infantino joined writer Robert Kanigher in DC Comics' first attempt at reviving a superhero from the “Golden Age” of comic books.  Kanigher and Infantino created an updated version of The Flash that would appear in Showcase #4 (cover dated: October 1956).  Infantino designed the Flash's now-classic red uniform with yellow detail and fashioned a new visual language to depict the Flash's speed, with both vertical and horizontal motion lines to make the Flash's figure a red and yellow blur.

In 1964, Infantino began his second DC Comics reclamation protect, when he was tasked with reviving the faded Batman line of comic book titles.  Infantino and writer John Broome introduced the “New Look” Batman and Robin in Detective Comics #327 (cover dated: May 1964).  Broome and Infantino abandoned the sillier aspects and fanciful characters that had crept into the Batman comics over the better part of two decades (such as Bat-Mite in 1959).

Under the guiding hand of this new creative team, the Adventures of Batman and Robin in both Batman and in Detective Comics took a detective-oriented direction.  Infantino's art for the “New Look” Batman and Robin was slick and streamlined.  He went away from drawing Batman in a style that was some variation of the art of Bob Kane, Batman's creator.  For the better part of three decades, most artists took their cue from Kane when drawing Batman comic books and newspaper comic strips, even if they already had their own distinctive style.

Carmine Infantino is the artist who visually and graphically and in terms of storytelling modernized Batman comic books.  From 1964 to 1968, Infantino was the lead comic book artist for DC Comics' flagship Batman titles.  Even when Infantino did not draw the interior art for Batman or Detective Comics, he usually provided the pencil art for the covers.

Infantino's work on the Batman titles over the four year period, from Detective Comics #327 to the cover of Batman #199 (cover dated: February 1968), for which he only provided the cover pencils, is collected in the hardcover comics collection, Tales of the Batman: Carmine Infantino.  Originally released in 2014, this full-cover archival collection also reprints Infantino's 1980s Batman work in Detective Comics #500 (cover dated: March 1981) and in The Brave and the Bold (issues 172, 183, 190, and 194 – 1982 to 1983).  There is also a story from DC Comics Presents: Batman #1 (cover dated: September 2004).

When I opened this book and saw the first page of Detective Comics #327, I was immediately struck by how different it looks.  Even 50+ years later, Infantino's art stands out as unique.  I have seen enough of the Batman comics that came before it to say this issue of Detective Comics represented a sort of evolutionary leap for Batman comic books.  In fact, in something unusual for comic books, Detective Comics seems new and “now.”  For a time, the relatively long lead time needed to produce comic books made them seem behind current events.  This comic book matched the looks, styles, designs, and visuals of the time, with some of the art resembling the design style known as “mid-century modern”.

Infantino made the world of Batman hip, modern, and urbane.  There is a James Bond quality to the graphical storytelling.  John Broome introduces adversaries for the Dynamic Duo that range from spectacular, colorfully costumed supervillains to conniving ordinary hoods.  Every one of them has fashioned some ingenious plan, wacky conspiracy, or over-thought murder plot that involves twists and turns and even secret agent-type gadgets.  Infantino's slick compositions and sleek draftsmanship make the entirety of a story seem more cool and stylish even when it ought to look like what it is – silly.

Infantino's “new look” Batman apparently inspired the mid to late 1960s, ABC television series, “Batman,” which starred Adam West as Batman and Burt Ward as Robin.  I also see the influence of Carmine Infantino's art on the Batman comic book artists that would follow him; Jim Aparo and Don Newton are two that come to mind.

If I had to offer specific reasons why you should buy this pricey book, I could name a few.  Well, this book reprints the first appearance of Barbara Gordon as Batgirl in the story, “The Million Dollar Debut of Batgirl!,” from Detective Comics #359 (cover dated: January 1967).  The book also reprints Infantino's Batman and Detective Comics covers.  Through his compositions for these covers, Infantino proves to be a master of motion, and these covers pulse with energy.  Sometimes, the entire cover illustration seems as if it wants to leap off the page because two dimensions cannot contain its vigor.

Posted by Leroy Douresseaux at 7:50 AM