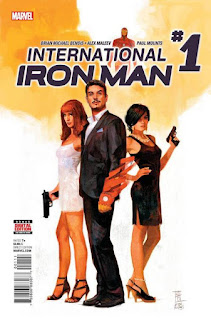 I did not know that a few years ago it was revealed that Tony Stark was adopted as a baby by Howard and Maria Stark (in Iron Man #17 – 2013 series).  Tony's quest to uncover his legacy is at the heart of the new Iron Man comic book series, International Iron Man.  It is written by Brian Michael Bendis; drawn by Alex Maleev; colored by Paul Mounts; and lettered by Clayton Cowles.

Who is Tony Stark, really?  International Iron Man #1 begins the quest to discover the answer to that question.  The story opens with Iron Man in Sofia Bulgaria at the “Monument to the Soviet Army.”  He has just got his butt kicked.  His mind drifts back 20 years earlier when Tony was a student at the University of Cambridge.  That is where he met Cassandra Gillespie, a mysterious young woman from an even more mysterious family that is marked for death.

I have never been a big fan of Iron Man, not the way I heart for Spider-Man (Parker and Morales), Batman (and Robin), and certain X-Men.  One Iron Man book is enough for me, and that one is currently Invincible Iron Man, which is also written by Brian Michael Bendis.  I guess this is my way of saying that I did not feel particularly moved by this first issue of International Iron Man.

Bendis and Alex Maleev are remembered for their run on Daredevil last decade, so fans of that comic book may rejoice at the chance to see if this team can do for Iron Man what it did for that book.  I wouldn't know what they did, as I have never read a single issue of the Bendis-Maleev Daredevil.

So I'm coming from a place of ignorance in some ways.  Apparently, Doctor Doom will play a part in this series, and while traveling the globe, Iron Man will discover things about the Marvel Universe that he did not know existed.  I'm kinda intrigued.  I may keep reading International Iron Man, but I won't go out of my way.  So how is that for a review?

Posted by Leroy Douresseaux at 8:01 AM