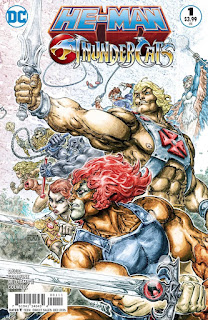 Masters of the Universe (MOTU) is a media franchise that began as an action figures line created by toy giant, Mattel.  MOTU is also often known as “He-Man” after the franchise's lead character and hero, He-Man/Prince Adam.  MOTU is set on the planet Eternia, a world that mixes medieval sword and sorcery with science fiction technology.  The premise of the story revolves around the conflict between He-Man and the evil Skeletor.

ThunderCats began as an animated television series created by Tobin “Ted” Wolf.  The show was an American production, but the animation for the show was done in Japan.  The series focuses on a group of cat-like humanoid aliens, the “Thunder Cats,” who, led by their young king, Lion-o, protects the world known as “Third Earth,” from the evil and powerful Mumm-ra.

As He-Man ThunderCats #1 (“Swords and Omens”) opens, Mumm-ra's punk ass has just lost to Lion-o... again.  Even a being who holds sway over death, however, must serve someone, and Mumm-ra's “benefactors,” the Ancient Spirits of Evil, want results.  What they want is on the magical planet of Eternia.  The method by which they send Mumm-ra to obtain it will force two groups of heroes together in order to save two worlds.

He-Man ThunderCats #1 does not necessarily start with a bang.  I was also put off by how much comedy plays on the Eternia end of the story because I had forgotten how much humor was a part of the “He-Man and the Masters of the Universe” animated series.  The first two-thirds of this comic book has a jarring tone, but writer Rob David and Lloyd Goldfine bring everything crashing together by the end.  Suddenly, it is serious; lives are on the line; and everything is at stake.

I was a fan of artist Freddie E. Williams II's work on the recent crossover comic book miniseries, Batman/Teenage Mutant Ninja Turtles.  In the first issue of He-Man ThunderCats, I am impressed by his ability to juggle big action scenes with the large number of characters he must depict.  I don't know if Williams can match his Batman/TMNT work, but I am curious to see where this goes.

Posted by Leroy Douresseaux at 7:36 AM