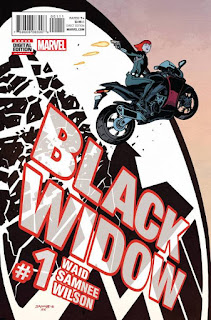 Black Widow is a Marvel Comics female superhero.  She was created by editor-plotter Stan Lee, scripter Don Rico, and artist Don Heck and first appeared in Tales of Suspense No. 52 (cover dated: April 1964).  When she was first introduced, Black Widow was Natasha Romanova, a Russian spy who did not wear a superhero costume.  She was an antagonist of Iron Man, but later defected to the United States, where she became an agent of the spy agency S.H.I.E.L.D., and a member of the Avengers, becoming, of course, a superhero.

Black Widow #1 opens with the title character fighting her way through an office section of the S.H.I.E.L.D. Helicarrier.  Black Widow has gone rogue and is fighting former colleagues.  She is now S.H.I.E.L.D. public enemy #1.  Why?

I have never read a single issue of Mark Waid and Chris Samnee's Eisner Award-winning run on Daredevil, but I keep planning on doing so.  I did read their thrilling IDW Publishing miniseries, The Rocketeer: Cargo of Doom, which I quite enjoyed (Encore! Encore!).

I'm curious about Black Widow because I am a fan of actress Scarlett Johanson's portrayal of the character in several Marvel Studio films.  So now I'm all like, let's read some Black Widow comics.  Well, this new Black Widow #1 is comprised of a long action sequence.  It is neither imaginative nor thrilling.  At the end of the book, Waid, Samnee, and editor Jake Thomas swear that we are in for something really good.  Just wait until the next issue... or the one after that... or the one after that...  [Just wait for the trade!]

This first issue is but a taste... OK.  So I'll give Black Widow #1 a grade of “B-” with the hope of a better grade on layaway.

Posted by Leroy Douresseaux at 9:10 AM