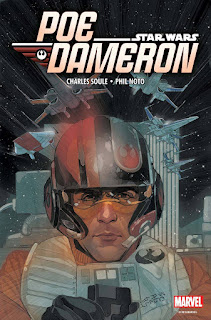 [This review was originally posted on Patreon. And visit the "Star Wars Central" review page here.]

Book I: Black Squadron, Part I

Poe Dameron #1 (“Black Squadron,” Part I) opens 30 years after the Rebel Alliance defeated the Galactic Empire (as seen in Return of the Jedi), which was replaced by the New Republic.  However, a new military force, the First Order, is plotting to overthrow the New Republic.  To face this new threat, General Leia Organa founded the Resistance.

The First Order is also looking for Leia's brother, Luke Skywalker.  Now, General Organa has tasked the galaxy's best pilot, Poe Dameron, to find Lor San Tekka, an explorer who investigates Jedi ruins.  Tekka may know where Luke is, but finding him will put Poe and his droid, BB-8, in a place that is both strange and dangerous.

Marvel Comics is publishing about four to five Star Wars comic books every month, and for the most part, much of that output is high-quality.  I was excited to learn that Marvel would be publishing a comic book focusing on Poe Dameron, who is one of the characters of which I want to see more in future Star Wars films.  I am expecting a lot from this comic book because I hope that Charles Soule can deliver the same excitement and thrills he did in last year's five-issue miniseries, Lando, which depicted a tale of Lando Calrissian before he was a mining mogul.

Well, the first issue certainly delivers on action and intrigue.  I have to be honest:  one of the reasons I like this comic book is that it connects to The Force Awakens, taking place just before the events depicted in the film.  Soule fleshes out more of Poe's personality, and he also expands into the unknown that surrounds the world of The Force Awakens.  And I have to give artist Phil Noto credit; he has a photo-realistic touch when it comes to drawing Poe.  Here, Poe the comic book character strong resembles Oscar Isaac, the actor who portrays Poe in The Force Awakens.

As a bonus, there is an eight-page backup story starring BB-8, written and drawn by the underrated cartoonist Chris Eliopoulos, who is known for his work as a comic book letterer.  I loves me some BB-8, and I like what Eliopoulos does with the character.  Encore!

Posted by Leroy Douresseaux at 12:41 PM