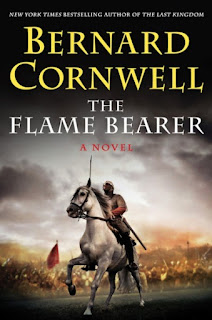 The Flame Bearer is a 2016 historical novel from Bernard Cornwell, a bestselling British author of historical novels.  This is the tenth book in Cornwell’s “Saxon Tales” series, his epic story of the making of England and his continuing story of Saxon warlord, Uhtred of Bebbanburg.  “The Saxon Tales” series is also known as “The Last Kingdom” series (named for the first novel in the series).  The Last Kingdom has been adapted into a television series.

The Flame Bearer finds Uhtred ruminating.  From the day it was stolen from him by his late uncle, Uhtred has dreamed of recapturing his family's fortress, Bebbanburg.  The great fort was built on a rock that was almost an island, a place conquered by Uhtred's legendary ancestor, “The Flame Bearer.”  It is massive and practically unconquerable because it can only be approached on land by a single narrow track and any way that it can be approached by sea can be observed and defended.  Bebbanburg is his, and Uhtred plans to take it from its current lord, his cousin.

However, Britain remains in a state of unease.  Sigtryggr is the Viking lord (and Uhtred's son-in-law) who rules Northumbria, the land north of the Saxon lands.  He has agreed to a truce with the Saxon Queen Aethelflaed of Mercia, the land that borders Northumbria.  New enemies, however, are making their play.  King Constantin of Scotland sees an opportunity to seize new land to the south.  Meanwhile, an old enemy among the Saxon heirarchy makes a move to take from Uhtred what is his.  Now, Uhtred must stop a war that could be a disaster for both the Saxons and Vikings and also outwit all those who plot against his claim on Bebbanburg.

Bernard Cornwell's novels have earned praise from many circles.  George R.R. Martin, the author of A Song of Fire and Ice (the inspiration for HBO's “Game of Thrones”), says that Cornwell writes the best battles scenes he has ever read.  USA Today has declared Cornwell “the reigning king of historical fiction.”

The Flame Bearer is only the fifth Bernard Cornwell novel that I have read, and only the fourth of the ten “Saxon Tales,” books.  I intend to play catch up because Cornwell's novels are a joy to read.  He is not just the “king of historical fiction.”  In the realm of this venerable genre, Cornwell is the “king of kings.”  If you like historical fiction and have not read Cornwell, life has robbed you.

In the previous novel, Warriors of the Storm, Cornwell presents Uhtred as a man in flux; in subtle ways, he was changing.  The Flame Bearer gives us Uhtred, a man and a warrior with a singular vision.  He's getting Bebbanburg the fuck back.  For all the vividly drawn characters, colorful locales, and sharp humor, The Flame Bearer is about its resolution, the bloody battle that will either return a domain to a lord or be the end of him.  A skilled writer and engaging storyteller, Bernard Cornwell makes you chase Uhtred and his warriors towards that exhilarating finale.

Posted by Leroy Douresseaux at 7:42 AM