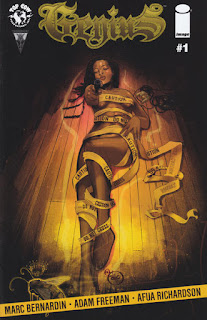 Genius was a weekly miniseries originally published by Image/Top Cow in 2014.  It was written by Marc Bernardin and Adam Freeman; drawn and colored by Afua Richardson; and lettered by Troy Peteri.  Genius focuses on a young woman who leads her community against an oppressive police force.  In 2008, Genius was also a winner of Top Cow’s “Pilot Season,” the annual event in which a reader vote decides which one-shots deserve to be transformed into longer comic book projects.

Genius #1 presents a kind of near-future scenario.  It is set in South Central Los Angeles where the African-American community is in revolt against the Los Angeles Police Department.  Shockingly, the leader of this revolt is 17-year-old Destiny Ajaye, who has a talent for military strategy and is a tactical genius.  Destiny has united the separate gangs of her neighborhood and community against a common foe, the oppressive police force.  Meanwhile, an agent of law enforcement, Reginald Grey, is looking for “Suspect Zero,” the unknown figure he believes to be the leader of this revolt.

I had heard of Top Cow's “Pilot Season,” but mostly ignored it.  I assumed that whatever Top Cow said it was – evidently a talent search of some kind – I thought that it was ultimately rigged.  I only started looking for Genius when I started looking for comic books drawn by Afua Richardson, a young African-American female comic book artist who has been getting some buzz over the last year.

What do I think of Genius?  Well, it is like nothing I have ever read.  It seems like a small press comic book simply because it does not seem like something Image would publish.  After all, I don't think any comic book publisher controlled, owned, and operated (let's face it) by white people would publish Genius, yet Top Cow did.

Genius, with its eclectic layouts, peculiar graphic design, and out-of-the-ordinary compositions, looks like a comic book someone would have to self-publish using a print-on-demand printer.  I am not saying this as criticism.  By the very nature of its story, Genius should be rebellious and against the grain.  It is after all about something that we need to face in the real world (and, for the most part, we do not).  Genius's original date of publication was timely and fortuitous.

When Genius was arriving on comic book shop shelves, America was in turmoil because unarmed African-American teenager, Michael Brown, was shot and killed by a white police officer in Ferguson, a suburb of St. Louis, Missouri.  The leadership of the Ferguson Police Department and the city's political class was doing everything it could to cover-up the killing and also to squelch protests against the police.  Later, the actions of the police department would lead many observers to believe that the cops deliberately sabotaged their investigation of the shooting in order to protect the cop that killed Mike Brown.

In this atmosphere, Genius was timely and relevant and remains so.  One could see it as prophetic, or as merely metaphorical.  One day, we might see this comic book as the vanguard of a revolution.  Genius's concept could be the idealized version, a realization, if you will, of something that needs to happen now or will happen in the immediate future of the United States.  I wish that Genius also becomes an attack against the white status quo in American comic books.  You should read this.

Posted by Leroy Douresseaux at 10:02 AM