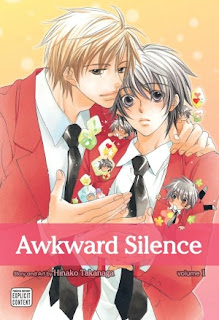 Born in Aichi, Japan, Hinako Takanaga is a female mangaka (creator) known for her yaoi manga work, including such titles as The Devil’s Secret and Liberty Liberty! She has also provided illustrations for light novels.

SuBLime recently published the first volume of her BL/yaoi manga series, Awkward Silence. For those who don’t know, “BL” is boys’ love manga, a comic book that features romance between male characters. “Yaoi manga” is a subset of BL that usually depicts explicit sex. Awkward Silence is about an introverted boy who finally gets the boy of his dreams, but finds himself too overcome to speak to his dream lover.

Awkward Silence Volume 1 introduces Satoru Tono is a shy, introverted, high school boy. He has long had a crush on Keigo Tamiya, a popular boy who plays baseball for their school, Nishikou High. Tamiya shocks Tono by striking up a conversation with him, but Tono is so overcome that he cannot respond to the nice things Tamiya says to him. As their relationship blossoms, Tono and Tamiya find others coming between the two of them.

One is Yukari Machida, a pretty girl who always seems to be next to Tamiya. Tono is shocked to discover that he is jealous of this pretty teen rival. Tono also discovers that Yuji “Yu” Sagara, a former childhood pal, is also a student at Nishikou. Yu wants to be friends again, much closer friends than before (and they were pretty close). Tamiya, however, thinks Yu is trying to get too close to Tono.

I think the most compelling thing about the romance of Tono and Tamiya is that one is such an introvert (Tono) and the other is the typical high school athlete/extrovert (Tamiya). Tono’s inability to give voice to his feelings – literally, he can barely speak when overcome with strong feelings – is a bit overstated. Hinako Takanaga presents this in such a way that it made me want to follow this love story, if for no other reason that to enjoy Tono’s humorous suffering. When he can’t express himself in words, Tono allows others to make assumptions about what he wants, thinks, or feels, and such misunderstanding is a mother of comedy invention.

The supporting characters, Yukari Machida and Yuji Sagara, are just what Awkward Silence needs when the narrative gets bogged down in the speechless boy/aggressive boy dynamic. More pixie than vixen, Ms. Machida is seemingly oblivious to the problems she causes, which makes her good for relationship comedy. Takanaga depicts Sagara as so insistent, especially in the way he pursues Tono, that he comes across as a lead character. Sagara is Awkward Silence’s biggest stimulus of conflict.

Takanaga’s art is not one of the better examples of graphical storytelling you’ll find in a yaoi manga. The art emphasizes facial expression, because this story is all about expressing feeling and depicting the intensity of romantic love and sex via facial expressions. Also, the story is divided into three chapters. Takanaga has Tono and Tamiya make love to close each chapter. And while the silence may be awkward, the bedroom play isn’t.

Posted by Leroy Douresseaux at 10:19 AM