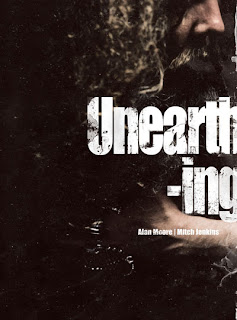 Top Shelf Productions and Knockabout Comics are truly pleased to announce a project several years in the making: a sumptuous new book from Alan Moore, serving as a biography of his close friend and mentor Steve Moore (no relation), a history of London, a mystical journey, and a tribute to human imagination. Called by The New York Times a "poetic and densely allusive text," Unearthing has now been transformed by Alan Moore and photographer Mitch Jenkins into a stunning narrative art-book.

And while UNEARTHING will be offered in the upcoming October Diamond Previews in two incredible editions, to help fund the production of this enormous expensive work of art, the creators have graciously agreed to an exclusive third edition incorporating a letterpress bookplate, hand-signed & numbered by Alan Moore and Mitch Jenkins, limited to 300 copies worldwide. These 300 Signed & Numbered “double-sized hardcover” copies are being pre-sold (starting today), as a Top Shelf website exclusive. By pre-ordering one today, you’ll not only be able to secure one of these rare Signed & Numbered editions, but you will also have done your part to help to get this gorgeous project off the ground.

Here’s what people are already saying about UNEARTHING!

“A tribute to a colleague and mentor and a demonstration that Moore has transcended the boundaries of the graphic novel.” -- The New York Times


"Steve Moore, who lives in the same room he was born in 61 years earlier, is a living metaphor for the history, geography and geology of Shooter's Hill and a conduit to the Greek gods and spiritual manifestations... Is it great art? Yes!" -- N.M.E.


“The men of Unearthing are only marginally of this plane of existence, and what they’ve created is positively out of this world.” -- The AV Club

And here are more details on this monumental project!

One of the world’s foremost authors of the fantastic, Alan Moore, joins internationally esteemed photographer Mitch Jenkins for an unprecedented visual and literary experience.

An intensely poetic and innovative work of biography, Unearthing maps the lifetime of author, orientalist and occultist Steve Moore, while simultaneously investigating the extraordinary history of South London with which that life has been intertwined. Integrating text with haunting and exquisite imagery, Unearthing excavates a territory at the margins of a city, of reality, and of human imagination.

Starting life in Iain Sinclair’s seminal anthology LONDON: City of Disappearances, this dazzling and hypnotic piece has evolved through a series of live performances and acclaimed recordings, culminating in this breathtaking full-color volume.

Thanks in advance for all your support of this amazing project!

Your friend thru comics,
Chris Staros
Posted by Leroy Douresseaux at 9:08 AM