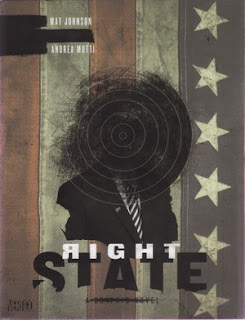 Right State is a new graphic novel from Mat Johnson, the author of the non-fiction book, The Great Negro Plot. The award-winning author currently teaches at The University of Houston Creative Writing Program. Johnson has been writing comic books since the 2005 miniseries, Hellblazer: Papa Midnite. He has also written the graphic novels, Incognegro (2008) and Dark Rain: A New Orleans Story (2010). DC Comics’ imprint, Vertigo Comics, published all three of these works.

Drawn in black and white by Italian artist Andrea Mutti, Right State is a political thriller that involves an apparent plot by a militia group to assassinate the second African-American President of the United States. The focus of the story is former Marine, Ted Akers, a conservative media pundit and an activist for military veterans. Asif, a Muslim-American who is an agent for the U.S. Secret Service, convinces Akers to infiltrate the Roots of Liberty, a military group based in rural Pennsylvania. This group is apparently planning to assassinate the second black President during a speech he will give on the Lincoln Memorial. When Akers accepts the assignment, the speech is four days away.

Infiltrating the militia group is a relatively easy task for Akers who is popular with conservatives and right-wing types because he is a frequent guest of Jay Bremen, who hosts his own conservative television talk show (on a FOX-like network). What is difficult is making contact with Ezekiel Dutton, a Gulf War marine and Department of Homeland Security agent who has apparently gone rogue or native and may now lead the Roots of Liberty. As the day of the speech grows closer, Akers discovers that the conspiracy is more complicated than Asif and his agency imagined and that there are also all kinds of shady types involved in the assassination plot.

First, Right State, for all its timely political commentary and pertinent satire, is a pure summer potboiler. Right State is like the proverbial John Grisham thriller that people supposedly take to the beach with them. It is a page-turning thriller that keeps you guessing with a number of twists and turns that actually make sense, instead of seeming contrived for cheap thrills. This is one of those times when I understand what it means to tear oneself away from something. I thought someone would have to tear this book out of my hands, as that would be practically the only way to stop me from reading it. Talk about some riveting reading.

Johnson weaves several themes throughout Right State, including depictions of the ways in which prejudice and bigotry impede progress in a complex society, which is what the United States is. The dominant theme concerns the characters inability to see the bigger picture of anything: the future of the country, their own lives, and even their own plots and schemes. Their racial animus, class resentment, and stereotypes blind men and women. The characters, both protagonists and antagonists, carry so much ignorance and bigotry about people who are different from them or groups of people that they just don’t like. Ultimately, the survivors have to see beyond their preferences, and if they want to win, they have to view things from a new perspective.

It is a testament to Mat Johnson’s ability as a storyteller that he can fashion complex characters that are too complicated to fit easily into the molds of heroes and villains. Artist Andrea Mutti turns Johnson’s story and characters into one of the edgiest non-fantasy comic books in years. Mutti offers a bleak interpretation of the contemporary American malaise. Rather than just draw a comic book, Mutti offers up modern fiction and proves that comic books can grapple with contemporary issues with genre flair. Right State also proves that Mat Johnson is the great emerging graphic novelist.


Posted by Leroy Douresseaux at 8:34 AM