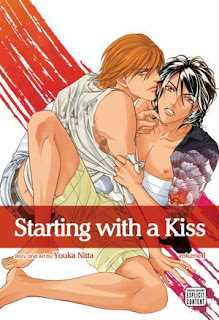 Born in Japan, Youka Nitta is a female mangaka (creator) known for her works in the boys’ love genre, especially the series, Embracing Love. Starting with a Kiss is a yaoi manga series from Nitta. The series focuses on two up-and-coming crime bosses who enter into a sexual relationship. Yaoi manga is a subset of boys’ love manga which features explicit depictions of sex between male characters.

Starting with a Kiss Volume 1 introduces readers to two characters. First, there is Tohru Suki, son of yakuza boss, Shinya Suki. Then, there is Mutsumi, the son of Itsuki Kiria, Shinya’s second-in-command. Shinya sends Mutsumi into exile on a deserted island in order to keep him out of harm’s way during a gang feud. Itsuki also sends Mutsumi with Tohru, hoping that his studious son will take a liking to the family business. Mutsumi doesn’t like the family business, but in Tohru, he does see something he likes – something he likes quite a lot.

I have read a fair bit of yaoi manga, but I don’t think I’ve seen as many penis silhouettes as I saw in this first volume of Starting with a Kiss. Like illustrated depictions of sex? Well, Starting with a Kiss Volume 1 is hip-thrusts ahoy. If you want sex in your yaoi manga, this volume will certainly give that to you. One young man is often on top of another, grunting and sweating as he pounds out a message of love on the fleshy typewriter that is his partner’s firm body.

However, this isn’t just some humping around. Starting with a Kiss has a sense of humor, and the fathers, Shinya and Itsuki, are a riot. Part of this first volume has some back story on them, but they deserve their own graphic novel. Leering yakuza soldiers and an over-protective fixer add to the comedy. Starting with a Kiss starts off just right.


Posted by Leroy Douresseaux at 7:39 AM