Review: THE EARL AND THE FAIRY Volume 3 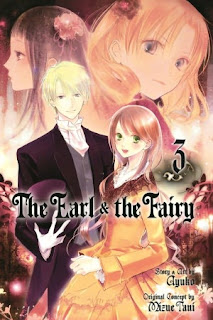 THE EARL AND THE FAIRY, VOL. 3
VIZ MEDIA – @VIZMedia

The series focuses on Lydia Carlton, a young woman living in 19th century England. She is a fairy doctor, a specialist who can see and talk to fairies, an ability which allows her to resolve problems (or attempt to) between fairies and humans. During a trip to London to visit her father, a young man, Edgar Ashenbert, rescues Lydia from kidnappers. A nobleman sold into slavery, Edgar is also tied to the Fairy Realm as the Blue Knight Earl.

As The Earl and the Fairy, Volume 3 opens, London is in the grip of fear. Someone (or something, of course) called the Fogman is snatching up children and young people all over town. Lady Doris Walpole has been missing for three days. Is she a victim of the Fogman? Lydia has been asked to help find her, and her investigation leads her to think that the Fogman has ties to Edgar’s dark past.

I think I love the London setting, and the role that fog plays in the series (at least, in this part of the narrative). I like stories about fairies, and I have to admire the restraint in which Ayuko uses actual fairy creatures in this story. Judicially using flashbacks, Ayuko builds the mystery around her characters, making even the little details about them intriguing. Plus, Ayuko makes excellent use of Nico the cat/fairy as a kind of Greek chorus and quasi-narrator.


Posted by Leroy Douresseaux at 7:16 AM