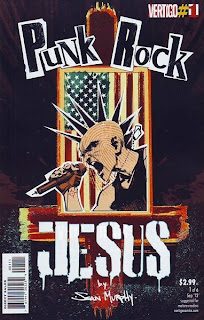 Late last year, I reviewed Joe the Barbarian: The Deluxe Edition (DC Comics/Vertigo), the hardcover edition of Grant Morrison’s miniseries, Joe the Barbarian. I focused my review on series’ artist, Sean Murphy. Born Sean Gordon Murphy, the Brooklyn-based animator and comic book artist is best known for his work with DC Comics, including the Batman/Scarecrow: Year One miniseries and Hellbazer.

At the time, I said that Murphy should be a star, and I was right. His latest work, a creator-owned series (although DC owns the trademarks) proves that. Written and drawn by Murphy, Punk Rock Jesus is a new black and white, six-issue miniseries set in the near-future. It is about a reality television series starring a clone of Jesus Christ.

Punk Rock Jesus #1 opens on tragedy then moves on to some craziness. American entertainment conglomerate, Ophis, has a surprise coming Christmas 2019. They are producing a new TV reality show, “J2,” starring the first human clone in history, Jesus Christ. With a little Jurassic Park-style genetic manipulation plus the Shroud of Turin, Dr. Sarah Epstein, geneticist and environmentalist, will obtain and insert genetic material into a donor egg. Teen virgin, Gwen Fairling, will be the new “Virgin Mother.” The guy providing security for Ophis and its biblical Frankenstein project, however, is Thomas McKael, who has his own very dark past.

Murphy has fashioned a fascinating concept full of engaging characters that he uses to deliver biting sarcasm, sparkling wit, and sharp satire. Still, the true star here is Murphy’s black and white art. Murphy takes his rock solid draftsmanship and first-rate compositions and creates an incomparable graphic style. This is a potent visual language that brings the characters to life in a way that makes them pop off the page.

Murphy draws the characters in such a way that their personalities and attitudes come through plainly. It is clear that each is different from the other. Thomas McKael is a large, solid man – a pillar of bad-ass. He is all brooding with an aura of menace that is a halo of warning to the other characters. Slade, an Ophis executive, is obviously a slimy money-grubber. He is like Mitt Romney stripped of his friendly-entrepreneur veneer so that the reptilian, Mammon acolyte beneath is laid bare. Murphy visualizes Dr. Sarah Epstein as thoughtful and contemplative. She is the most sane and sensible of this lot, although she is the mad scientist here.

I wouldn’t call Punk Rock Jesus a punk comic book; Murphy is too polished and skilled to come across as either a rebel or an outlier. Still, Punk Rock Jesus’ attitude is closer to punk than most mainstream comic books.

Praise the Lord, this is a good one. I plan on being a loyal follower of this Jesus.