I Reads You Review: HAWKEYE #1 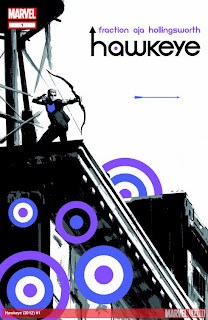 Hawkeye is a Marvel Comics superhero character and the Marvel Universe’s most prominent archer, marksman, and sharpshooter. Created by Stan Lee and Don Heck, Hawkeye, whose civilian identity is Clint Barton, first appeared in Tales of Suspense #57 (September 1964 cover date). He first appeared as a member of the Avengers in Avengers #16 (May 1965 issue).

Marvel’s The Avengers movie is a shocking worldwide box office success. With the appearance in the film of a spiffy-looking Hawkeye, it was a no-brainer that Marvel Comics would try out the character in his own new comic book series. Hawkeye (2012) is written by Matt Fraction, drawn by David Aja, and colored by Matt Hollingsworth.

Hawkeye #1 opens in New York City and finds Hawkeye/Clint Barton having some serious health issues. After healing, Clint returns to his apartment in Bedford-Stuyvesant (Bed-Stuy), where he finds the real trouble. His Russian landlord is bringing pressure on Clint and the other tenants. When Clint tries to save the day and to make a deal with these Russian heavies, things get bad – for our Avenger and a cute dog.

If Hawkeye #1 seems familiar, it’s the highly-stylized riff on Frank Miller and David Mazzuchelli’s Batman: Year One that plucked your memory. Hawkeye even comes across as being similar to Bullseye from Miller’s famous run on Marvel’s Daredevil comic book series in the early 1980s. That aside, this first issue of Hawkeye is more a Clint Barton story than a Hawkeye comic book, and that’s fine. I like how Fraction depicts Barton as a sort of laconic everyman who only turns on the extra-powers when he has to do so. Here, he does it just to balance the scales for the little guys and gals. Notice, I said, extra-powers, in this story, Clint doesn’t come across as a superhero.

As for Aja’s art, which is a scratchy imitation of Mazzuchelli on Batman: Year One, it’s nice, but not great. The storytelling is good; by drawing so many small panels, Aja creates a pace and rhythm that serves this story quite well. The only problem is that Fraction’s script is non-linear, jumping back and forth as if Fraction were trying to write a Quentin Tarantino movie. Thus, just as Aja’s graphical storytelling is moving briskly on a particular sequence, it moves to another set piece, which is jarring, especially when the previous sequence was going so well.

Still, I like this enough to read future issues. It’s both different and entertaining enough to warrant more attention.

B+
Posted by Leroy Douresseaux at 9:14 AM