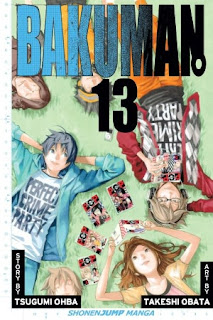 Takeshi Obata is a Japanese manga artist. In his published work, he has been the artist in collaboration with a writer. Tsugumi Ohba is a writer of manga whose identity/gender is a secret (although I refer to Ohba as “he” or “him”). Ohba has twice collaborated with Obata, first on the controversial series, Death Note. The second is Bakuman, a shonen manga. This slice-of-life comedy/drama/romance is about two ninth grade boys who set out to become manga creators.

Akito Takagi is an aspiring writer. Moritaka Mashiro likes to draw. After the two meet in high school, Akito begs Mashiro to join him in creating manga, and they eventually become the manga team, “Muto Ashirogi.” They achieve success by getting their manga published in the magazine, Weekly Shonen Jump. After having two series cancelled, this duo creates its longest-running hit, PCP: Perfect Crime Party. But do these young men have what it takes to make it in the manga-publishing world?

As Bakuman, Vol. 13 (entitled Fans and Love at First Sight) opens, Moritaka and Akito learn that PCP is unlikely to become an anime, which was their goal for the series. Each begins thinking about his next move. One of their assistants, Shun Shiratori, is working on a proposal for his own series, entitled “Loveta & Peace.” Moritaka enters Weekly Shonen Jump’s “Love Fest” contest, which is to create a one-shot manga with a romantic theme, but without his writer, the young artist struggles. Plus, Muto Ashirogi gets to judge new talent and comes across a stunning new series proposal.

Practically every time I review the Bakuman (stylized as Bakuman。) manga, I write that it gets better. I like it so much that I just can’t stand it anymore. I find myself slowly reading it so that I can savor each page as if it were a delicious bite for the mind. Actually, Bakuman is one of several VIZ Media titles of which I receive review copies, so I can’t be playin’ around and taking my own sweet time with reading and reviewing.

Of all the comic books and books I’ve read about creating comics (fiction and non-fiction), this is my favorite. What makes it work is the superb character writing by Tsugumi Ohba; this series is a joy to read when you buy into the lives, conflicts, and desires of the characters.

The other reason Bakuman is such a success is artist Takeshi Obata, who is one of the best comic book artists working today. He is a master at composition and at fitting style and pace to capture the setting, plot, and mood at any point in the story. Some artists have trouble changing direction just once in a single issue or chapter. Obata can change multiple times on a single page. Bakuman is the work of supreme manga creators who have mastered their art.


Posted by Leroy Douresseaux at 8:41 AM