I Reads You Review: THE ROCKETEER: CARGO OF DOOM #1 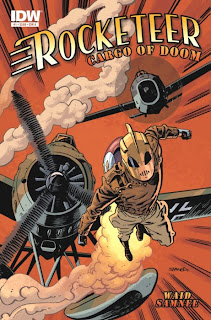 THE ROCKETEER: CARGO OF DOOM #1

The Rocketeer is a comic book character created by artist and illustrator, Dave Stevens (who died in March of 2008). The Rocketeer is Cliff Secord, a stunt pilot who discovers a mysterious jet pack that allows him to fly, and his adventures are set mainly in Los Angeles in and after the year 1938.

The Rocketeer returned to comic books in 2011 in Rocketeer Adventures. Edited by Scott Dunbier and published by IDW Publishing, this anthology comic book was a tribute to Stevens and featured Rocketeer short stories from some of the premiere creators in American comic books. Now, the adventure continues in the new series, The Rocketeer: Cargo of Doom, from writer Mark Waid and artist Chris Samnee.

The Rocketeer: Cargo of Doom #1 opens in 1940. Cliff dons his Rocketeer garb and gear to rescue two people from a struggling airplane. One of those people is Sally, the young niece of Peevy, Cliff’s best pal and the one mechanic who can tinker with the Rocketeer’s jetpack. Sally has a mad crush on Cliff, and Cliff’s actress/bombshell girlfriend, Betty, is fuming about the crush and Sally. Meanwhile, something wicked has just docked at the port in Los Angeles, and the sinister mastermind targets The Rocketeer.

As much as I liked both Rocketeer Adventures series (or at least parts of Vol. 2), I wanted IDW to publish an actual Rocketeer story arc. I was excited to discover The Rocketeer: Cargo of Doom while reading the list of comic books shipping this week (8/22/). I was immediately determined to get my hands on this comic book, and having just read it, I am not disappointed.

When Mark Waid is on, the comic books he writes are fun to read. In Cargo of Doom, he uses dialogue to form the characters for readers, and crackling dialogue is always preferable to a psycho-babble when it comes to developing comic book characters. This is why I think someone like Waid is more of a natural at creating comic book than other writers who seem to have some kind of quasi-literary credibility. Under Waid’s care, Peevy hasn’t been this spicy since Dave Steven’s original comics. As for the characters’ actions, Waid also makes that clear and straightforward, from the lecherous government agent to the mercurial Guptmann.

I had been planning on reading some comic books drawn by Chris Samnee, but I was reluctant to try some of his Marvel Comics work if that meant figuring out whatever is going on in the Marvel Universe. Samnee’s art bears similarities to the work of Darwyn Cooke, David Mazzuchelli (Batman: Year One era), and Bruce Timm, while remaining uniquely his own style. Samnee’s figure drawing is killer, and there is a bit of classicism in the way he poses characters, as if he were drawing human bodies for academic critics.

I must admit that I am not crazy about Cargo of Doom’s cover price, and I may ultimately balk at paying $20 to read the entire series. Still, The Rocketeer: Cargo of Doom #1 is one of the year’s best debuts.

Posted by Leroy Douresseaux at 9:03 AM