I Reads You Review: YOUNG JUSTICE #18 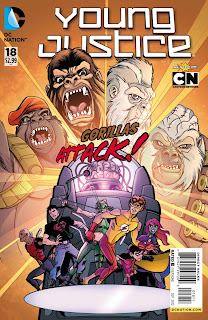 Young Justice #18 (“Monkey Business”) begins with a wrap up of the team’s recent (mis) adventures. That includes a case involving Red Tornado and also a mission in India with Captain Marvel acting as den-mother. Now, Batman sends Aqualad, Robin, Superboy (and his pet Wolf), Artemis, Kid Flash, and Miss Martian into darkest (imaginary) Africa – the nation of Bwunda.

There, in the Bwundan jungles, they will find the Brain and Monsieur Mallah’s latest Kobra-Venom operation. Although Young Justice recently shutdown the Brain’s last such operation, the villain has an ally this time around, Ultra-Humanite, and he’s calling on Grodd to deal with the children.

My reviews of Young Justice, issue numbers 16 and 17, praised the art by Christopher Jones. Jones is a classic comic book artist in that he understands the visual and graphical storytelling that brings superhero comic books to life. His page layouts and style capture the eye, and his compositions sell the drama and action of the story. After Jim Lee on Justice League, Christopher Jones is the best artist on a Justice League title.

Sans co-writer Kevin Hopps, Greg Weisman offers a story that is darker than the previous story arc. In “Monkey Business,” Weisman places the young heroes in what clearly reads like a convincing perilous situation. More so than in the previous issues, I want to come back for the second part of this.

The story features my favorite Green Lantern villain, the Tattooed Man, and I enjoyed reading the preview. I will try to find a copy of this issue.

Posted by Leroy Douresseaux at 5:12 AM