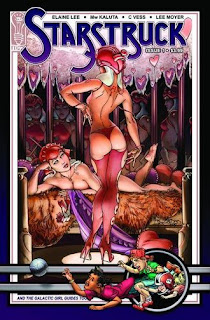 [IDW Publishing did indeed publish all thirteen issues of their Starstruck re-launch slash re-packaging. Now, the publisher has collected the entire series in an oversized edition (in paperback and hardcover) collecting all thirteen issues with re-mastered art and extras. In conjunction with the release of this collection, I am reprinting my review of IDW’s first issue that I originally wrote for another site.]

In 1980, Elaine Lee, along with her co-writers, Norfleet Lee and Dale Place, saw the off-Broadway production of her stage play, Starstruck. Lee continued the characters and stories of Starstruck in comics form. Written by Lee and drawn by Michael Kaluta (who contributed to the play’s staging), the Starstruck comics were a prequel to the events of the play and revealed the history and relationships between the various characters and introduced new characters. The Starstruck comics first appeared as comic strip series in Heavy Metal magazine in 1982.

Marvel Comics re-published the strips that appeared in Heavy Metal in 1984 as the graphic novel, Starstruck: The Luckless, the Abandoned and Forsaked (Marvel Graphic Novel #13). The graphic novel was followed by a six-issue comic book series published under Marvel’s Epic Comics imprint. Plans by Lee and Kaluta to reprint the previously published Starstruck comics and to add new material resulted in the aborted Starstruck: The Expanded Universe (four issues from Dark Horse Comics, 1990-91), as well as a few stand-alone “Galactic Girl Guides” short story comics in Dave Stevens’s The Rocketeer Adventure Magazine (two issues, Comico Comics, 1988-89).

Now, it seems as if everything that Elaine Lee and Michael Kaluta want to release as Starstruck comics will finally see publication because IDW is publishing a new 13-issue Starstruck series. The entirety of Starstruck #1 is previously published material: 15 pages of Starstruck; six pages of “Galactic Girl Guides;” and four pages of supplementary material that explains the Starstruck universe (in a rather obtuse way).

Starstruck is set in a far-flung, alternative future. One might think of it as something like the science fiction and fantasy comics of Moebius, Howard Chaykin’s American Flagg! (which Starstruck predates), Zap Comix!, and Star Wars thrown into a blender. A space opera, Starstruck follows the offspring of two powerful houses as they vie for wealth and dominance in a universe that is newly freed from the Incorporated Elysian Republic. Issue one introduces several characters, but focuses on Baron Bajar and his son Kalif and daughter Lucrezia.

Lee’s story and script are complicated and challenging, but fans of space opera will want to dig through this intricate and exotic concept. Of course, having Mike Kaluta, with his decorative, illustrative style, as the artist to visualize Lee’s concepts into comics art is serendipity. Her oblique and outlandish storytelling and his intricate, Pre-Raphaelite graphic scenarios were meant to be together.

As much as I like the main story’s astonishing weirdness, “The Galactic Girl Guides” is the kind of sweet treat I’d want to have on a regular basis. Written as a playful, comic appendage to Starstruck, GGG is simply about girls having fun, playing pranks, and seeking out adventure – the kind of things that most storytelling leaves to boys. Unlike the main narrative, in which Kaluta pencils and inks the art, Charles Vess inks Kaluta’s pencils, and the resulting difference in look makes GGG seem like a more traditional kid friendly comic book than Starstruck.

Before this review ends, I must call attention to painter Lee Moyer’s glorious new coloring for this rebirth of Starstruck. I’d buy this comic book just to see more of the color splendor found on pages 6-7.


Posted by Leroy Douresseaux at 6:44 AM