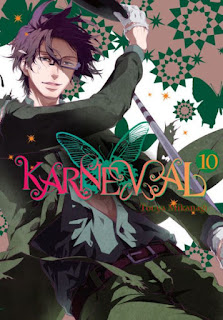 Karneval is a Japanese manga series written and drawn by Touya Mikanagi.  It has been serialized in the manga magazine, Monthly Comic Zero Sum, since August 2007.  Yen Press is currently publishing an English-language edition in of Karneval in a series of extra-large paperback graphic novels.  Each Yen Press graphic novel contains two volumes of the original Japanese “tankobons” (graphic novels) under one paperback that has a larger-than-standard trim size.

Karneval begins with a young man named “Nai” who travels in search of another young man who goes by the name of “Karoku.”  The only lead to Karoku that Nai has is a bracelet.  Nai later meets Gareki, a willful young man who is a thief and a pickpocket.  Eventually Nai and Gareki are hunted as criminals, but they are eventually captured by the “National Supreme Defense Force,” also known as “Circus.”  This changes their lives for the better when they join in the adventures of the crew of Circus' 2nd Ship.

Karneval, Vol. 10 collects the original tankobon editions of Karneval Volume 19 (Chapters 107 to 111) and Karneval Volume 20 (Chapters 112 to 116).  Vol.19 opens in the aftermath of the 2nd Ships' mission in Leberganze.  Now, they must say goodbye to new friend and ally, Manai, who is Mieuxmarie, the former princess of “Rimhakka.”  Manai must rejoin her people in their new home.

The end of Vol. 19 and the main body of Vol. 20 recount the origin story of the connection between Karoku and Nai.  It begins with the story of how Karoku's parents, Nisu and Benié Almerita, took their son and escaped from the clutches of the mysterious research organization, “Kafka.”  The Almerita clan finds safety in the practically impenetrable “Rainbow Forest,” but the treachery of the outside world is always pressing against them.  Then, tragedy leads to the creation of Nai.

The Karneval manga is entirely new to me.  Even with my Internet research, I found reading it deep into the series, initially, to be “tough sledding.”

Karneval Graphic Novel Volume 10, however, turns out to be a fantastic read, once the origin story takes over Vol. 10.  Most of it involves the story of Karoku and Nai, and it is a powerful story of sudden violence, friendship, grief, terrible scientific research, death, and ultimately betrayal.  It is as if creator Touya Mikanagi is summoning the heart of this narrative.

Si Mon Han's translation is a wonderful and engaging read, and once I started on the tale of Karoku and Nai, I could not stop reading until I finished Vol. 10.  So, even after only reading one volume of the Yen Press edition, I will recommend that readers at least take a look at Karneval.


Posted by Leroy Douresseaux at 4:18 PM