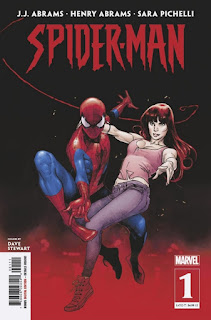 Spider-Man is the classic Marvel Comics superhero that debuted in Amazing Fantasy #15 (cover dated: August 1962).  Peter Parker, a high school student, was bitten by a radioactive spider.  That bite gave him strange powers, including the proportional speed and strength of a spider and his “spider-sense” a kind of internal warning beacon.  Parker donned what would become his trademark red and blue costume (that he made himself), and became the crime-fighting superhero, The Amazing Spider-Man.

Spider-Man publications have always attracted celebrated comic book creators who wanted to tell Spider-Man stories.  One of the most recent is acclaimed film director and Emmy-winning television producer, J.J. Abrams.  Abrams and his son, Henry Abrams, are the writers of a new five-issue comic book miniseries, entitled Spider-Man.  [When this series is collected in book form,“Spider-Man: Bloodline” might be the title.]  The series is drawn by modern Spider-Man superstar artist, Sara Pichelli, with Elisabetta D'Amico as an inking assistant.  The series colorist is Dave Stewart, and the letterer is Joe Caramagna.

Spider-Man #1 opens on what may be the worst day of Spider-Man's life.  His battle against a powerful villain named  “Cadaverous,” has left him grievously wounded.  For the hero, the day also turns stunningly, shockingly tragic.

Twelve years later, Peter Parker travels, practically non-stop, always working on another “assignment.”  Meanwhile, Peter's son, Ben, lives with Aunt May and struggles, not because he is a bullied wallflower – like the teenage version of his father.  Ben fights back, which drives a wedge between him and his father.  Now, Aunt May believes it is time for Ben to learn some secrets...

I am a huge fan of comic book artist Sara Pichelli, who is the artist most associated with Miles Morales, the Ultimate Spider-Man and the star of the Oscar-winning film, Spider-Man: Into the Spider-Verse.  Here, Pichelli delivers some of her most beautiful illustrative work, and her storytelling is emotive, potent, dramatic, and lovingly mysterious.  Nailed it!

After Marvel announced that J.J. Abrams and Henry would be writing a special Spider-Man comic book, I came across the usual cacophony of negative commentary from the fan-resentment chorus.  However, the American comic book industry would be better off if more Hollywood types, that are quite skilled in the art of the story, wrote comic books.  Abrams excels at emotion, character drama, female characters, and family drama, especially when it comes to the dynamics between parent and child.  I don't know how much Henry is contributing to writing here, but it is good.  Nailed it!

Everyone who reads comic books on a regular basis knows that Dave Stewart is currently among the very best colorists in American comic books, if not the best.  I can say that here, Stewart “Nailed it!”  Letterer Joe Caramagna... captures the subtle and quiet atmosphere of this first chapter with his usual skill.  So he... Nailed it!, too.

I am happy that the Abrams' Spider-Man is one of those superstar-driven, event comic book publications that is actually, really damn good.  I am so ready for more.

Posted by Leroy Douresseaux at 4:54 PM