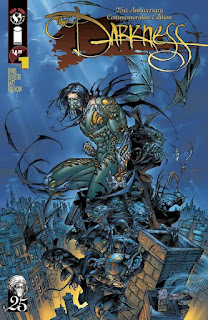 The Darkness is a long-running comic book series created by artist Marc Silvestri, writer Garth Ennis, and editor David Wohl.  The Darkness focuses on Jackie Estacado, a mafia hit man who inherits “the curse of the Darkness.”  The character made his debut in Witchblade #10 (November 1996) before making his solo debut in his own series.

In celebration of the twenty-fifth anniversary of The Darkness #1 (December 1996), Image Comics and Top Cow Productions, Inc. are publishing The Darkness #1 25th Anniversary Commemorative Edition.  This one-shot comic book reprints the story contents from The Darkness #1 and also includes an interview, an essay, a five-page section reprinting select cover illustrations produced during the series first 16 years, and other material.

The Darkness #1 (“Coming of Age”) opens at night on the Lower East Side of New York City.  Tall, dark, and handsome mafia hit man, Jackie Estacado, has just executed his latest target in service of his boss, Don Franchetti.  This latest bloody move by the Franchetti mob starts a bloody skirmish with rival mobster, Don Tommy Marchianni.  Jackie, Don Franchetti's top enforcer, is caught in the middle.

But the young killer has bigger problems.  He is about to turn 21-years-old, and “The Darkness” is about to start calling for him.  And the “Angelus” is coming for him.

THE LOWDOWN:  I read the first 10 or 12 issues of the original run of The Darkness back in 1996-97, but I eventually grew bored with this comic book and stopped reading it.  I have to admit that I had high expectations for it.  After all, the writer was Garth Ennis, red-hot in the mid-1990s because of his DC Comics/Vertigo series, Preacher.  I was a huge fan of post-Marvel Comics Marc Silvestri.  I thought many the comic books that Silvestri drew for Marvel Comics looked awful because of his chicken-scratch drawing style.  But Image Comics-Marc Silvestri seemed like an entirely different artist, especially when Silvestri's pencils were inked by the great Scott Williams.

Yet every time I read The Darkness, I felt like Ennis and Silvestri were not really delivering on this concept's potential.  I understood that the universe of Silvestri's Top Cow Productions, Inc. was obsessed with some kind of angelic vs. demonic rivalry, similar to that of Jim Lee's Wildstorm Productions universe.  However, I didn't think that Ennis and Silvestri really understood where they could take The Darkness in terms of narrative.  In The Darkness, Ennis delivered a stillborn version of the usual outtakes from his ultra-violence wheelhouse.  Silvestri's art was an unimaginative spin on the grim-and-gritty riffs that everyone was stealing from Frank Miller's Batman comics.

I don't know if The Darkness every reached its potential.  Frankly, I didn't give a crap after I stopped reading the series, but on occasion, I would see an issue of The Darkness and wonder about it … I have to admit.

The Darkness #1 25th Anniversary Commemorative Edition commemorates an anniversary that is only important to Top Cow because … let's be frank … it does not have much to commemorate.  The original Image Comics creators, Marc Silvestri among them, turned their studios into vanity project factories that produced poorly written comic books that featured the kind of art that only the artists and their sycophantic fans thought was great.  This is something that can be said of many of the artists associated with Image Comics first decade, for instance Rob Liefeld and J. Scott Campbell.

It is only in the last 15 years or so that Image Comics has delivered on the promise that the birth of the publisher offered to both comic book creators and readers.  The Darkness represents a placeholder in the evolution of Image Comics.  After the fanfare for their first wave of comic book series faded, some of Image's founders moved on to offering exciting new concepts.  For Jim Lee, it was Divine Right, and for Silvestri, it was The Darkness.  At least, The Darkness ran much longer than Divine Right.

The Darkness #1 25th Anniversary Commemorative Edition, as a package, is nothing special, but – and there is a big but – reading it again did remind me that The Darkness still has great potential.  I enjoyed re-reading this reprint of the first issue, and I might reread a few more of the original issues.  I still think that The Darkness is an outside-the-box comic book concept that could be an exceptional dark fantasy comic book.  But will it ever be that?  Does it matter?

This issue contains the feature “Say Good Night to the 'Good Guy'” by Henry Barajas and Claire Napier.  This feature includes illustrations; an questions-and-answer session with Marc Silvestri and David Wohl; a bullet-point presentation about the publication, licensing, and merchandising success of The Darkness.

Posted by Leroy Douresseaux at 4:13 PM