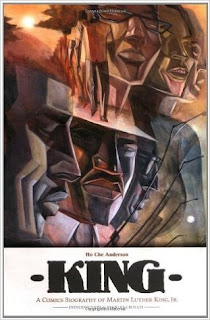 King was a three-volume graphic novel series written and illustrated by Ho Che Anderson and published by Fantagraphics Books.  Anderson is a British-born, Toronto, Canada-based comic book creator and illustrator.  Over his three-decade career, Anderson is known for such works as I Want to Be You Dog (1997), Scream Queen (2005), and Godhead (2018).

King was a comic book biography of slain Civil Rights leader and icon, Dr. Martin Luther King, Jr. (1929-1968).  The first volume was published in 1993, the second in 2002, and the third in 2003.  In 2005, Fantagraphics collected the series in a single over-sized paperback volume, entitled King, and subtitled “A Comics Biography of Martin Luther King, Jr.”  Stanley Crouch provided a weighty three-page introduction to the book.  The 2005 edition eventually went out-of-print, and Fantagraphics released a new hardcover edition in 2010 (which is currently still in stock via Amazon).  This review references the 2005 edition.

Any reader who is a fan of comic book biographies or historical comics will find that the King collection, even sixteen years after its collection, remains an essential edition to any comic book library.  This paperback collection, with its French cover flaps, has the book design and printing quality of pricey art books and illustrated historical retrospectives.

THE LOWDOWN:  King, Vol. 1 debuted in the second half of 1993, and, of the three volumes, it is the closest to actually being a biography that focuses on Dr. Martin Luther King, Jr. as a human.  Certainly, the narrative here reveals him as a man grasping at greatness, but the Dr. King in Vol. 1 is like clay still being molded into a great man.

In this volume, Anderson uses collage and traditional drawing in various styles to illustrate the narrative.  Some of the art may remind readers of Kyle Baker and Dave McKean and, from the fine art world, Pablo Picasso.  It is simply a virtuoso performance in the illustration of a comic book, but it is also an example of someone taking advantage of the comic book medium's storytelling potential.

The script and dialogue are also important in Vol. 1.  The easy thing to do is to describe this as a biography of King.  It is that, but much more.  King, Vol. 1 covers the early movements of the entire Civil Rights movement.  It does so with such force and flavor that this sometimes comes across like a documentary film, except we're getting the most powerful and informative still moments from that film.  The reader really gets a sense of struggle and conflict through the characters.  Anderson manages to give each character a unique voice, which in turns broadens the scope of the narrative about the movement.

Early in Vol. 1, Anderson creates a series of talking head panels.  Each character, a sort of background player, has a say, which allows him or her to have an immeasurable impact on the narrative's ability to communicate multiple points of view.  It also allows for multiple points of view of the main character.  This is similar to a Greek chorus, or even closer, this is like Frank Miller's use of the television talking heads in Batman: The Dark Knight Returns.

If, back in the early 1990's, Joe Sacco showed us how comics can be journalism (Palestine), Anderson, then, showed us how comic books can tell history.  Thus far, comic's biggest achievement in the field of history is Maus; other than that, it's mostly been war stories.  King might come across as that dreaded important book one must read, but it is a great work of comics in the tradition of Maus.

Anderson uses the same illustrative techniques as in the first book: collage, drawing, painting, and some mixed media.  His script remains the darling of this project.  Here, Dr. King isn't so much a main character as he is a player (albeit the primary one) in a major social event.  We do get snippets of Dr. King's character, but here he is most interesting as the most prominent figure in a movement that swells and ebbs with tidal consistency.  I have a number of favorite moments in this volume.  There are the private meetings between Dr. King and President John Kennedy (Anderson's account is speculative, as the subject of the conversations were known only to King and Kennedy).  Two other exceptional moments are when Dr. King's daughter asked to be taken to a theme park and she couldn't understand why black children would be unwanted there; and the " I Have a Dream" speech.

This work could have had the same problem that movies have when they attempt to cover a large historical movement or a public figure with a rich past.  Sometimes, movies hop from one big moment to another and end up looking like an over produced highlight reel, as in the case of Michael Mann's film, Ali.  Anderson makes full use of the space on every page, using concise unadorned dialogue and brief bits of conversation that advance his story.  Imagine the excitement that Neal Adams brought to comics four decades ago in page layout.  Combine that with traditional layout, Film-Noir, fine art, collage, and you have Anderson's King.

When King, Vol. 2 was first published it was another example of the continuing evolution of comic books as a serious medium of storytelling, and revealed that comics could engage in the kind of myth making and communication that prose and film, both fiction and non-fiction, have been doing for a long time.

King, Vol. 3 is the last book in Ho Che Anderson's three-piece suite, an interpretative biography of Dr. King.  In his afterword to the third volume, Anderson wrote he understood that some readers might find this last book's appearance “visually eclectic.”  Anderson wrote that he felt he had earned the right to indulge himself.

The book's narrative eclecticism is, however, equally worthy of notice.  It's as if the author devoured the history of the Civil Rights movement and regurgitated a book that couldn't possibly contain the movement's far-reaching story, but the author would certainly give it his best shot.  Of course, Dr. King was the epicenter of the Civil Rights movement and is focus of Anderson's graphic novel, but even as a fictional character, King seemed lost in a movement larger than his life, but not his legend.  For all that King the comic has, it seems to be missing not just something, but a whole lot of things.  Vol. 3 perhaps revealed the shortcomings of this entire concept without crippling the larger novel.

If we accept Anderson's conceit of his book's personal bent, many notions of historical accuracy get tossed.  This isn't to say that the book is inaccurate, but as with any broad movement in history, each pair of eyes might see the same thing as any other pair, but look at it differently.  The Civil Rights movement is exactly that, a movement; it's not a single incident in time.  The Civil Rights movement is a whole bunch of events and moments artificially lumped together in hopes that it'll be easier to make sense of what happened.

It is best to examine King the comic as a graphic narrative and to investigate how well it works as a comic book, rather than to argue its historical merit alone.  Pretensions aside, this is still a comic book, and (dammit) there's nothing wrong with that.  We should always remember that comic book creators produce work like The Spirit or Love & Rockets just as they easily create digestible products for reading, which we can also enjoy

What Anderson does in King is take the graphic narrative another step forward the way comic books like The Spirit and Love and Rockets did.  Both were revolutionary in their form at the time of their initial release and even further ahead of the high concept/low brow narratives that make up the bulk comic book storytelling today (DC Comics' “Black Label” line).  It's as if Anderson took all the raw materials that he could use to make comix and used them to produce his final volume of King, making it far more adventurous than even the previous two volumes.

Anderson uses talking heads, collage, splash pages, photographs, line drawings, paintings, color effects, special effects, surrealism, expressionism, and guess what?  It all works; it actually looks like a comic book.  So often comic books try to look like something else, for instance, comic book art that looks like anime or painted comics that look like Norman Rockwell paintings.  King is a comic book, an expensive comic book printed on enamel paper with card stock covers, but by gosh, still a frickin' comic book.

Visually, King 3 has such a sense of organic unity, in which all the disparate parts come together to give this book its own life.  Each reading seems to tell a story different from the previous reading.  The book seems almost self-aware, as if the words and pictures deliberately communicate something beyond the static images on the surface of the page.

There is one thing about the story of movement Anderson gets right.  Civil Rights are an ever growing ideas that absorb people, places, and times, and the best an observer can do is understand just that.  Who can ever nail this thing down, and, in way, it seems that Anderson's fictional Dr. King can't ever really put his finger on it the entire pulse of the movement.  King has an idea of his place inside the movement, but he has trouble getting a fix on where the movement itself is going.

Anderson also seems to have a little difficult putting his finger on the pulse of the story because he moves from one plot to another or in and out of subplots like a journalist running madly from one news hot spot to another.  Best example is when Dr. King discusses with Ralph Abernathy the possibility of Abernathy taking King's place as spokesman for the Southern Christian Leadership Conference if something were to happen to MLK.  The wonderful exchange between the two is a fascinating peek at Dr. King's place in the SCLC, but it only tantalizes with the mention of other "leaders."  Ho Che leaves the idea of SCLC rivalries dangling because Dr. King's rivals for power over the larger movement are perhaps more important to this story.  Throughout the series, Ho Che gives the reader a small taste, here and there, of King the man, even if the narrative demands a deeper look than what the author gives.

Still it's good that Anderson didn't make the King he was “supposed to make.”  He didn't make the one for which other people (like me) would have wished.  In spite of what faults it may have, King is example of what a cartoonist can create within the medium of the so-called "graphic narrative" when he uses all the artistic elements available to him.  Anderson took an adventurous leap forward with this comic book – a brave, personal, artistic statement and an adventurous leap forward with the comic book – warts and all.  King shows that comics can deal with subject matter weightier than, say, Wolverine's origins or just how screwed up Batman/Bruce Wayne is.  Maybe Ho Che Anderson is one of the few cartoonists capable of treating comics as a medium of art and communication the way the great novelists, short story writers, musicians, and filmmakers treat their respective mediums.


The text is copyright © 2021 Leroy Douresseaux. All Rights Reserved. Contact this blog or site for reprint or syndication rights and fees.

Posted by Leroy Douresseaux at 4:09 PM