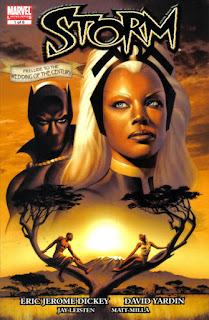 [The 2006 miniseries, "Storm," was basically a reboot of the story of Storm's relationship with the young man who would become the Black Panther when both were young. The series remains strong, and I wish the late Eric Jerome Dickey would have written more comic books featuring Marvel Comics' African and African-American characters.]

Eric Jerome Dickey (1961-2021) was a New York Times bestselling African-American author.  He was best known for his novels about contemporary African-American life, such as Sister, Sister and Milk in My Coffee.  Dickey, who died January 3rd, also wrote crime novels that were international in their casts and settings, like A Wanted Woman.

Storm a/k/a Ororo Munroe is a Marvel Comics super-heroine and longtime member of the X-Men.  She was created by writer Len Wein and artist Dave Cockrum and first appeared in Giant-Size X-Men #1 (cover dated: May 1975).

Storm is also the former queen consort of Wakanda, a title she held when she was married to King T’Challa, better known as the superhero, Black Panther.  Before the two were married (in Black Panther #18 cover dated: September 2006), Marvel published several stories and comic books under the tagline, “Prelude to the Wedding of the Century.”

One of those series was Storm, a 2006, full-color, six-issue comic book miniseries.  It was written by Eric Jerome Dickey; drawn by David Yardin and Lan Medina (pencils) and Jay Leisten and Sean Parsons (inks); colored by Matt Milla; and lettered by Randy Gentile.  In the Storm miniseries, Dickey re-imagines the first meeting between the younger versions of both Ororo Munroe and T'Challa.

The story opens in an outdoor market in an unnamed African country.  Ororo Munroe, our future “Storm,” is among a number of street urchins that prowl the market looking for things they can steal from the shoppers and shopkeepers and even from those simply passing through the market.  Goaded by her compatriots, Ororo steals a camera from a white man.  What she does not realize is that this white man is de Ruyter, a South African and a ruthless hunter and poacher who is also a racist.  He is determined to track Ororo using any brutal means necessary.  Zenja, a jealous rival of Ororo’s, watches the situation, making plans of her own.

Flashbacks also show Ororo with her parents, her African-American father, David Munroe, and her African (Kenya) mother, N'Dare.  With the upheaval of change causing so much turmoil in America, N’Dare wants to return to her home country in Africa.  David does not believe that they will be better off in Africa.  Will their marriage survive this crucial disagreement?

Meanwhile, Ororo’s strange powers began to manifest themselves.  Plus, Teacher arrives to tell Ororo that the lessons in picking pockets and thievery she learned from her first teacher, Achmed El-Gibar, are not enough to suit his purposes.

The issue first offers series cover artist, Mike Mayhew's haunting cover painting of the shattered Munroe family photo.  The racist South African poacher continues to stalk Ororo, determined to capture her for the mysterious powers he has discovered she possesses.  A jealous rival turns out to be more ally than enemy.  Plus, a mysterious young man comes to the rescue.

The mysterious young man is T'Challa, son of the King of Wakanda, T'Chaka.  T'Challa is on his “walkabout,” a “journey into manhood,” and he finds himself in a serious philosophical debate with “Teacher,” the man who teaches Ororo and the other “urchins” to be thieves.  T'Challa is drawn to Ororo, who is recovering from the poison of a tranquilizer dart used on her by de Ruyter.  Speaking of the white hunter, he calls his brother, Andreas de Ruyter a.k.a. “the Bull,” to help him capture Ororo, whom he calls the “Wind Rider.”

Ororo has left with young T'Challa, and their romance begins in earnest.  Elsewhere,  Andreas de Ruyter learns who T'Challa is, and the Bull's past as an adversary of Wakanda is revealed.

Ororo and T'Challa struggle with what they mean to each other in the wake of consummating their relationship.  Then, they are captured.

Ororo settles matters with her rival, Zenja.  In a high-flying helicopter chase, T'Challa and Ororo have their final battle with the de Ruyter brothers.  Then, the young couple continue their journey together – one a warrior and one both a warrior and a woman.

THE LOWDOWN:  Black writers can bring different perspectives and diverse points-of-view to comic book storytelling.  In one single issue, Storm #1, Eric Jerome Dickey shows what different perspectives on storytelling and diverse points-of-view can mean to the mythology of one X-Men in particular, Storm, and to the X-Men, in general.  Dickey really puts Ororo through her paces, forcing her to endure many challenges and obstacles if she is to survive her life as a thief and as a denizen of a jungle refuge.

Over the course of the six issues that comprise the Storm miniseries, Dickey creates a coming-of-age story that resonates with African themes, but is also an universal story of a young person finding  herself and her place.  Ororo’s life is not difficult just because she is an orphan, but also because she is, in some ways, a stranger in Africa.  Dickey, as a Black man, understands the stress fractures that exist in what it means to be Black in a larger culture and how it relates to heritage.  When Ororo’s fellow thieves insist that she is not one of them, Dickey brings a sense of authenticity and realism to those accusations.  He hits right at the heart of the matter.  Africans may see Ororo as a Black American and not at all as an African, no matter what her mother, N’Dare’s origins are.  This is another way that Dickey makes Ororo's story a universal tale.  Storm is a story that is also about the search for identity, and everyone, regardless of his or her group origins, can identity with that.

I would be remiss if I did not also praise artists David Yardin and Lan Medina and their inkers, Jay Leisten and Sean Parsons.  Throughout this series, the art is consistently beautiful, and the storytelling is dramatic, action-packed, bracing, and romantic.  The art and graphical storytelling deftly conveys the setting, making it both exotic and familiar.  Matt Milla's colors glow and sparkle, and also make Storm shimmer, giving her blue eyes an otherworldly quality.  The high drama and action would fall flat without Randy Gentile's dynamic and dynamite lettering.

Eric Jerome Dickey had a superb creative team for Storm.  They are the reason that the one work of comics that he left behind is brilliant and hopefully will delight readers for a long time to come.

I READS YOU RECOMMENDS:  Fans of Eric Jerome Dickey and fans of the X-Men's African weather goddess, Storm, will want to read Dickey's Storm miniseries.

Posted by Leroy Douresseaux at 4:35 PM