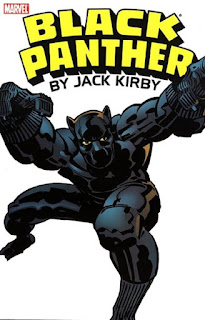 [The late comic book maestro, Jack Kirby, is, of course, not an African-American comics creator.  However, Kirby was instrumental in creating the greatest Black comic book character of all time, the Black Panther. The character has become an icon in American culture, and, I suspect, will eventually become an iconic figure in world popular culture.  So, as far as I'm concerned, Jack Kirby deserves a little spot of his own in Black History Month.]

Black Panther is a Marvel Comics superhero.  He was created by artist Jack Kirby and writer Stan Lee and first appeared in Fantastic Four #52 (cover dated: July 1966).  Black Panther is T'Challa, the king and protector of the (fictional) African nation of Wakanda.  Black Panther was also the first Black superhero in mainstream American comic books.

After his debut, Black Panther made guest appearances in other comic books and with The Avengers #52 (cover dated: May 1968) became a member of the Avengers.  Black Panther received his own feature in the title, Jungle Action, beginning in 1973.

Jack Kirby returned to Marvel Comics after working at rival DC Comics for several years.  One of his assignments upon his return was a new ongoing Black Panther comic book series.  Beginning with Black Panther #1 (January 1977), Jack Kirby began chronicling new adventures for the King of Wakanda, and which he continued doing until Black Panther #12.

Published in 2005 by Marvel Comics, Black Panther by Jack Kirby Vol. 1 reprints Black Panther #1 to #7.  These seven issues combine to form a story arc that sees Black Panther pitted against “the Collectors,” a group of powerful eccentrics that hunt the greatest treasures of history, fable, and myth.  Black Panther finds himself coerced into taking the lead in finding two treasures – one incredibly dangerous and the other capable of granting immortality.

Black Panther and Mister Little are captured by one of the latter's fellow Collectors, Princess Zanda.  It is Zanda who discovers the brass frog's true nature.  It is a time machine, and she proves that by bring forth a super-powered creature from six million years in Earth's future, the “Six Million Year Man.”  This “man” is nearly impossible to defeat.  Black Panther, Mister Little, and Zanda must travel to King Solomon's burial chamber.  There, they believe this will find King Solomon's Frog's twin, which will give them the power to return the Six Million Year Man to his own time.

Next, Zanda is joined by fellow Collectors:  Count Zorba, Colonel Pigman, and Silas Mourner in blackmailing Black Panther and Mister Little into traveling to the mysterious and hidden “Samurai City.”  There, they will find the “Sacred Water-Skin,” which holds the “water of immortality.”  And the Collectors want them some immortality.

Meanwhile, back in Wakanda or, as it is called in this series, “the Wakandas,” there is trouble.  Black Panther's half-brother, General Jakarra, has staged a coup.

THE LOWDOWN:  Supposedly, Jack Kirby was not happy writing and drawing the Black Panther comic book.  Apparently, he wanted to work on new characters, believing that he had already worked extensively on Black Panther material.

Kirby's alleged unhappiness did not show in the material reprinted in Black Panther by Jack Kirby Vol. 1.  This was not Kirby's best work, neither as a writer nor an artist, but his imagination remained powerful.  Odd characters, lavish and outlandish costumes, lunatic technology, and weird, wild, and wondrous lost civilizations:  Kirby was an idea machine, and he certainly was one in this strange Black Panther series.

Once again, as he had done with Wakanda, Kirby imagined a mystically powerful and highly technological African civilization, this time in the form of Princess Zanda and her denizens.  Also, Zanda herself is special.  Her facial features are powerful and strong like those of actress-singer Grace Jones, but also softer.  Her costumes look as if they were created for a Fashion Week runway, but are dotted with odd patters and shapes.  Zanda is one of the most beautiful Black female comic book characters that I have ever seen.

Kirby, however, was not hugely imaginative in his characterization of Black Panther/T'Challa in this series.  Kirby played T'Challa as a stalwart hero, but he gave him a sense of right-and-wrong that was similar what writer-artist Steve Ditko did with some of his characters, such as the Question.

As the cover copy says on two issues of Black Panther, Black Panther #1-7 offers “action in a mystic  realm...”  This is more weird fiction than typical superhero comics, but, as unpopular as Kirby's Black Panther apparently was, these stories did seem to influence future Black Panther comic book writers.  The sense of the mystic and weird remain, even a little, in modern Black Panther tales.

A year or so after Jack Kirby embarked on this Black Panther ongoing comic book, he left the title.  Less than a year after his last issue, Black Panther #12, Kirby left Marvel Comics for good.  Personally, I look at Black Panther by Jack Kirby Vol. 1 as a chance to enjoy the wonderful work that Kirby did for Marvel Comics, an entity that exists mainly because of Kirby's imagination and hard work.

Before we go, dear readers, I want to note two things.  First, there was a Vol. 2 collection of Kirby's Black Panther comic books.  Secondly, Jerron Quality Color's “color reconstruction” and restoration of the art reprinted in this book is simply gorgeous.  Jerron restores the original rich, flat colors and makes them pop off the page of this collection.  So I will give Black Panther by Jack Kirby Vol. 1 a grade that reflects what I feel about the story and about the quality of this trade paperback.

I READS YOU RECOMMENDS:  Fans of Jack Kirby will want to read Black Panther by Jack Kirby Vol. 1.

[This book includes a seven-page gallery of cover art, sketches, and unused art committed by Jack Kirby in the creation of the Black Panther.]

Posted by Leroy Douresseaux at 4:39 PM