#28DaysofBlack Review: ME AND THE DEVIL BLUES Book One 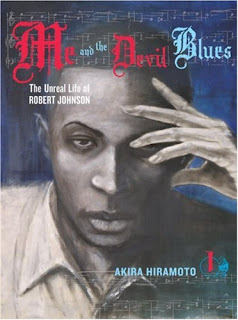 ME AND THE DEVIL BLUES: THE UNREAL LIFE OF ROBERT JOHNSON, BOOK ONE
DEL REY MANGA

Me and the Devil Blues is a seinen manga written and drawn by Akira Hiramoto.  It is a fictional biography of legendary blues musician and singer-songwriter, Robert Johnson.  It was first published in Japan in Kodansha's manga magazine, Monthly Afternoon, from 2003 to 2008, before going on hiatus.  When Hiramoto resumed the series in 2015, it moved to Young Magazine the 3rd Magazine.  Del Rey Manga published an English-language edition of the first four book collections of the series in two two-volumes-in-one paperback graphic novels.

[Since the publication of this book, Del Rey Manga ceased operations in 2010.]

Me and the Devil Blues mixes myths and legends and mythological and legendary figures.  Likely because of the stories told by fellow blues legend, Son House, the story of Robert Johnson says that he made a deal with the devil to become an expert blues guitarist and singer, with the cost being his soul.

Me and the Devil Blues: The Unreal Life of Robert Johnson, Book One begins in 1929.  It is set deep in the impoverished Mississippi Delta where a nigga’s life ain’t worth crap and lynching is a community event much like a church social.  This is where we meet Hiramoto’s stand-in for Robert Johnson, RJ, a poor farmer who just doesn’t want to spend his life hoeing a field.  Despite the protestations of his pregnant wife, the former Virginia Travis, her family, and his friends, RJ wants to learn to play the blues.

Fate brings him into contact with the popular traveling bluesman, Son House, and his partner, Willie Brown.  House insists that understanding and playing the blues is about more than a guitar technique, but RJ ain’t hearing it.  As far as RJ is concerned, all he needs is someone to show him how to make his fingers work guitar magic, so his stubbornness leads him to a fateful night at an abandoned church.  [This tale co-stars Clyde Barrow.]

THE LOWDOWN:  There’s some powerful mojo in Me and the Devil Blues manga.  Akira Hiramoto’s manga sparkles with wild magic and sets the imagination afire.  What drives this superb manga is not just the excellent contents of the word balloons (OK, dialogue), but the stunning visuals, which Hiramoto composes using a variety of styles, techniques, and media.

Me and the Devil Blues: The Unreal Life of Robert Johnson, Book One is the story of an individual African-American.  However, it tells the story of the struggles of Jim Crow-era black people in a way that has rarely been told in such passionate and astonishing pictures outside of cinema and fine art.  I would say this manga belongs with the few great comics about black people like Ho Che Anderson’s King, Kyle Baker’s Nat Turner, and Sue Coe’s X, which like Me and the Devil Blues are works by cartoonists or writer/artists.

Imagining a Japanese man drawing such beautiful and beautifully-human African-Americans in a story that captures the Black American experience with such authenticity seems unreal.  It’s not that Hiramoto presents black people as a noble, oppressed people.  It’s simply that he made me believe that these cartoons, these comic book characters really lived.  They haunt me, yet I want to share the trials and tribulations of RJ and his people, as seen in this special work.

I READS YOU RECOMMENDS:  People who read great comics will want to read Del Rey Manga's Me and the Devil Blues.

Posted by Leroy Douresseaux at 4:48 PM