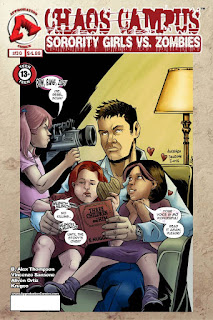 [For the last two decades, B. Alex Thompson has been one of the most prolific independent comic book publishers, via his Approbation Comics.  He has published a number of ongoing series, miniseries, graphic novels, webcomics, one-shots, and trade paperbacks in several formats and genres, including science fiction, social dramas, horror, and anthologies.  Thompson's signature series is the delightful "Chaos Campus: Sorority Girls vs. Zombies."]

Chaos Campus: Sorority Girls vs. Zombies is the long-running zombie apocalypse comic book series from Approbation Comics.  Mixing in elements of comedy, horror, and adventure, it is the creation of B. Alex Thompson.  The series is set during a zombie invasion and follows the adventures of three members of the sorority, Epsilon Alpha Zeta Upsilon (EAZY):  ass-kickin’ Jamie Lynn Schaeffer, brainy and magic-wielding Paige Helena Patton, and sexy Brittany Ann Miller.

Chaos Campus: Sorority Girls vs. Zombies #30 (“Super Chaos Babies”) opens in the aftermath of “One Night at Pheromones.”  The girls have joined their friend, Oliver, in a bid to stop “Brass Monkey,” a diabolical cybernetic chimpanzee, from destroying a colony of surviving humans.  However, the EAZY girls are exposed to a strange form of radiation during the battle and revert to childhood – with a twist.  Jamie, Paige, and Brittany now have super-powers.  But can they save this survivor town from the ape's evil plan when their new powers may have a lethal side effect?

THE LOWDOWN:  After bringing “The Road to Salvation” story line to an end, writer B. Alex Thompson brings some levity to Chaos Campus via a series of standalone stories.  The previous issue's one-off tale was “One Night at Pheromones.”  Now, we get “Super Chaos Babies.”

Thing about these standalone stories is that they allow the artists to shine, as artist-colorist did in “One Night at Pheromones.”  This time artist Vincenzo Sansone and colorist Alivon Ortiz take the show.  They deliver art that reminds me of some of the weird science fiction horror comics created by the recently deceased comic book legend, Richard Corben.  Sansone's storytelling has horror elements, such as the zombies, which are fast paced.  The cybernetic design of Brass Monkey and the laboratory settings add a counter-balance that blends the horror with the sci-fi.

Alivon Ortiz's colors have a painterly quality that has the look of a prestige painted comic, the kind that appeared in Heavy Metal and Marvel's late, great Epic Magazine.  As usual, the lettering by Krugos sets the tempo and mood, and fits into all the right places on the page.

Chaos Campus #30 is a surprisingly good one-off issue, but what else would I expect from B. Alex Thompson.  He writes strong science fiction/horror comics that do not take themselves too seriously while being true to both genres.  Chaos Campus #30 is also a good place for new readers to start.

POSSIBLE AUDIENCE:  Fans of zombies and of horror-comedies will want to try Chaos Campus: Sorority Girls vs. Zombies.


The text is copyright © 2020 Leroy Douresseaux. All Rights Reserved. Contact this blog or site for reprint or syndication rights and fees.

Posted by Leroy Douresseaux at 4:08 PM