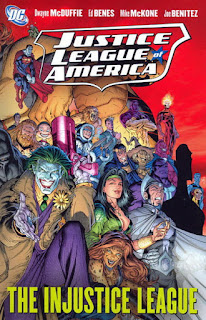 The story arc began in the one-shot special, Justice League of America Wedding Special #1 (November 2007) and ran through Justice League of America issues #13 to #15 (November 2007 to January 2008).  Issue #16 (cover dated: February 2008) offered two related stories.  “A Brief Tangent” was written by McDuffie; drawn by Benitez (pencils) and Llamas (inks); colored by Pantazis; and lettered by Leigh.  “Tangent: Superman's Reign” was written by Alan Burnett; drawn by Allan Jefferson; colored by Pantazis; and lettered by Leigh.

The backdrop of “Unlimited” is the impending wedding of Oliver “Ollie” Queen, the retired superhero known as Green Arrow, and Dinah Lance known as the hero, Black Canary, the leader of the Justice League of America.  The male members of the League are holding a bachelor party for Ollie that is not going as well as expected.  The female members are holding a bachelorette party for Dinah.

Soon, at St. Vincent's Hospital in Greenwich Village in New York City, Wonder Woman and Hawkgirl are fighting the new Injustice League's members, Cheetah, Dr. Light, and Killer Frost, while Firestorm (Jason Rusch) is in a hospital bed, gravely injured from his battle with the villains.  Batman and Red Arrow (Roy Harper) find themselves ambushed by The Joker, Fatality, and the Shadow Thief, who have already taken out Geo-Force.

With members of the Justice League falling to its adversaries, the Justice League is outmatched, and its numbers are dwindling.  Lex Luthor, however, is focused on his main target, Superman, and Luthor promises that he has devised a way to finally destroy Superman.

THE LOWDOWN:  Dwayne Glenn McDuffie died on February 21, 2011, one day after his 49th birthday.  McDuffie was a comic book writer, and he was one of the founders of Milestone Media.  This pioneering minority-owned-and minority-operated company created comic books which featured superheroes and other characters that were either African-American or other minorities whose depictions were underrepresented in American comic books.

McDuffie also wrote and produced for television, specifically for animated TV series.  He was a writer-producer for one season of Cartoon Network's “Justice League” (2001-2004) and a writer-producer for its follow-up, “Justice League Unlimited” (2004-2006).  He wrote and/or produced for three iterations of Cartoon Network's “Ben 10” franchise.  McDuffie also wrote several episodes of the animated series, The WB's “Static Shock” (2000-04), which was based on the Milestone comic book series, Static, that McDuffie co-created and co-wrote.

McDuffie may have been one of the most under-utilized talents and under-appreciated and underrated writers during his three-decade career in the American comic book industry.  Since I don't owe anyone anything and because I don't care much about consequences, I can freely say that had Dwayne McDuffie been a white man instead of an African-American, his status as a comic book creator would have been the American comic book industry equivalent of “most favored nation.”

However, much of his creative output was for DC Comics, where the most powerful editorial positions, those that hand out the writing gigs, were held by bigots, racists, and a variety of sexual harassers and abusers.  During his time at Marvel, McDuffie would have encountered much of the same thing, and during the last decade of his life, Marvel editors mainly hired white guys whose work impressed them and their friends outside the job.

Yet, in spite of such obstacles, McDuffie carved out a career telling hugely entertaining stories in comic books.  McDuffie was a traditionalist and largely eschewed the more “adult” and “mature” storytelling modes that began to dominate American comic books in the 1970s.  Yes, McDuffie was a modern writer and his work did feature elements of realism, but he wrote classic fantasy stories of good and evil in which the shades of gray served the plot, characters, and settings.  McDuffie did not write “grim and gritty” for the sake of style or fad.

That can be seen in the comic book, Static, which is a modern and perhaps, “urban contemporary” take on Spider-Man.  Static was a black teen superhero facing typical teen problems, learning to understand his powers, and dealing with the struggle to learn how to be a superhero.  Thirty years before the debut of Static, a white teen, Peter Parker, lived similar experiences in the pages of Marvel Comics' The Amazing Spider-Man.

McDuffie's storytelling is efficient and every panel on every page is consequential, and there is no “decompression” filler.  From the beginning of the story, there is enough tension to create anxiety in the reader for his heroes, and I certainly found myself racing towards the end, hoping that things would work out in the end.  Of course, the heroes always (sort of) win in the end, but the best writers of superhero comic books convince readers that this is it – the end of the line for the good guys.  And McDuffie did that in “Unlimited,” seemingly with ease.

“Unlimited's” plot is so engaging that I ignored the inconsistency of the graphical storytelling due to the shifting art teams.  Actually, the artists offer straight-forward storytelling.  Artists Ed Benes, Mike McKone, and Joe Benitez might not be the best comic book artists or draw the prettiest pictures, but they are quite good at superhero comic book storytelling.  In the end, their art tells a fine story with great characters, and comic book fans swear that is what they really want...

And if audiences and editors really wanted great-stories-characters, then, Dwayne McDuffie, teller of fine comic book stories filled with hugely attractive characters, would not have had to wait to the last half-decade of his life for an A-list assignment in comic books.  By the way, those outstanding editorial citizens fired McDuffie from Justice League of America less than two years into his run on the title.

But they could not kill his pride... nor our memories of his work.

I READS YOU RECOMMENDS:  Fans of Dwayne McDuffie will want to treat themselves to Justice League of America: The Injustice League.

Posted by Leroy Douresseaux at 4:03 PM