#28DaysofBlack Review: HARDWARE: The Man in the Machine - no text 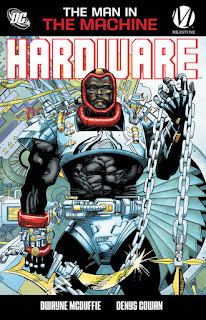 HARDWARE: THE MAN IN THE MACHINE
MILESTONE MEDIA/DC COMICS

Milestone Comics was the publishing division of Milestone Media and was published and distributed by DC Comics.  Milestone was founded in 1993 by a coalition of African-American artists and writers, consisting of Dwayne McDuffie, Denys Cowan, Michael Davis, and Derek T. Dingle.  Milestone Media's founders believed that minorities were severely underrepresented in American comic books and wished to address this.  In 1993, Milestone Media launched its first four titles Icon, Blood Syndicate, Static, and Hardware, the subject of this review.  DC Comics ceased publication of Milestone titles in 1997.

In 2010, DC Comics published the trade paperback Hardware: The Man in the Machine, which collected Hardware #1 to #8 (April 1993 to October 1993).  Like all Milestone titles, Hardware was set in the Milestone Universe, called the “Dakotaverse.”

Metcalf was a working class child prodigy and inventor who was discovered at age 12 by Alva.  With the blessing of Metcalf's parents, Alva enrolled Metcalf in “A Better Chance,” which was “a program intended to get minority students into elite prep schools.”  Metcalf proved to be much smarter than all the other prep school students and graduated at age 14.  With Alva paying his college tuition, Metcalf earned the first of his seven college degrees at age 15.  In exchange, after graduation, Metcalf began working in Alva Industries' “Inspiration Factory,” where the employees created high-tech gadgets by the hundreds.  However, it was Metcalf's inventions that made Alva many millions of dollars.  After a few years, Metcalf approached Alva about getting a share of the profits from his inventions.  Alva not only declines, but he also tells Metcalf that he is a mere employee, a “cog in the machine,” Alva's machine.

Metcalf begins secretly using Alva resources to create the hardware, software, and technology that becomes Hardware.  Metcalf also discovers that Alva is secretly a powerful crime boss.  Metcalf as Hardware begins his war against Alva, destroying Alva's criminal machine one piece at a time.  However, Hardware also rings up a high body county, so will he lose his soul in his personal war against his boss?

THE LOWDOWN:  When the discussion of black superheroes pops up, it often turns to the question of whether actual African-Americans as writers would tell better stories about Black superheroes than writers who are white.  Of course, some always say skin color doesn’t really matter, but they’re always white, speaking from the perspective of advantage and of white privilege.

A white man can certainly write really good comic books featuring African-American characters.  In the 1970’s, Marv Wolfman and Chris Claremont wrote excellent darkly comic and bloody horrific stories featuring Marvel Comics’ vampire hunter, Blade.  But there’s just something about a writer who has lived as a black man in America writing stories about a fictional character that is not just a black superhero, but also a black person living in America.

But sometimes, being a black writer spinning a narrative about a black character does matter.  Witness the short-lived, mid-1990’s comic book series, Hardware.  Hardware was the first comic book published by Milestone Media.  Milestone was an imprint of DC Comics that sought to publish superhero comic books featuring a more diverse cast in terms of skin color and ethnicity, in particularly African-Americans.  In the case of Dwayne McDuffie, who died in 2011, Hardware’s scribe and co-creator, the title had a storyteller who certainly understood what it was to be a talented African-American who repeatedly bangs his head against the glass ceiling of white privilege, of white supremacy, and of white racism.

What McDuffie gave Hardware was the sense of being more than just a fictional character with a skin color default setting (as many, if not most, white comic book characters are).  McDuffie made the character, in a sense, an idealized version of a black man struggling to prove that he can be and is exceptional in spite of what others may expect of him based on his skin color.

It is not impossible for a white man to write a title like Hardware.  Still, there is something that rings true and feels genuine about the African-American experience in McDuffie’s work on Hardware.  From the opening scene in which a young Curt Metcalf studies the parakeet that will not stop banging its head against the glass window for freedom to the scene of an adult Metcalf learning to check his rage and see the bigger picture of his revenge, McDuffie was likely writing what he knew, but regardless, it reads like the truth.  That is what made McDuffie not just a really good black writer of comic books, but an exceptional comic book writer when compared to just about any other comic book scribe.

Hardware is not perfect.  The character blends Marvel's Iron Man with DC Comics' Batman, but the storytelling and graphic design seem to owe a lot to the big guns and high-tech gadget superheroes that defined most of the early Image Comics superhero titles of the 1990s.  The issues that make up Hardware: The Man in the Machine focus on Curt Metcalf's violent, ruthless, and gory war of revenge.  Hardware is indeed an “angry black man,” and that makes the series mostly stuck in violent mode early on.  Hardware is not Dwayne McDuffie's best work, but it is unique.  Also, there is the chance to enjoy the inventive designs and imaginative compositions of another under-appreciated black comic book creator, the great artist, Denys Cowan.

I READS YOU RECOMMENDS:  Fans of Milestone Comics will want to read Hardware: The Man in the Machine.


The text is copyright © 2021 Leroy Douresseaux. All Rights Reserved. Contact this blog for reprint and syndication rights and fees.