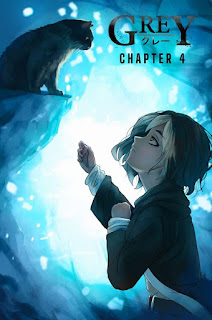 Grey is an independent comic book series from writer Kris Hornett and artist Ardee Arollado.  Published by The Grey Room, Grey is a hybrid, a combination of an American comic book format and Japanese manga.  Grey is similar to what was once called “OEL manga” or “original English language” manga.  These were American graphic novels in which the storytelling borrowed or mimicked the aesthetics and sensibilities of Japanese manga (comics).

Grey is set in the realm of Ketiyama (apparently an archipelago) and takes place some time after an event known as “the Sonoma Incident.”  This outbreak of the lethal “Moon Virus” on Nacirema, one of Ketiyama's islands, led to chaos, destruction, and division.  As a sign of good faith and as a last attempt to restore order, the ruling Board of Officials allowed the people to elect a team of highly trained tactical agents, known as “the Bureau,” to serve and protect them.  Within the Bureau is an elite unit known as “Nimbus.”  This team of five agents are sworn to maintain moral balance and to enforce the law.  The agents of Nimbus are also able to manipulate their “prana” (“life energy”).

Grey. Chapter 4. opens in a hospital as 13-year-old Asuka Yagyu faces questions, but she only wants to speak to one particular person.  Meanwhile, Shuyin and August try to find normalcy in their lives, but Shuyin's mind and memories keep playing tricks on him.  Elsewhere, Belisia, Kale, and Kouken, continue their deep dive into the past of Willow Marius in order to uncover her accomplices and to unravel the larger mystery that surrounds her.

THE LOWDOWN:  Grey continues to prove how conceptually well-developed it is.  From the beginning, readers discover that the world in which Grey is set has a complex history.  As readers, we get to watch the authors build a world in front of us.  The other exciting element is that Grey is full of mystery, so the readers can always enjoy the sense of discovery.

Grey Chapter 4 sees the characters trying to unravel the mystery that is Willow Marius, and I see her as something of a gift.  Each time I read Grey, I want to know more about her, which I can also say about many of the characters in this series.  Still, she is the beautiful enigma that is driving the unknown in this series – at least, so far.

Each issue, Kris Hornett takes time to give us a view of multiple characters.  I think that makes readers curious about the other characters, and I know that it makes me want to read the next issue as soon as possible.  Meanwhile, Ardee Arollado's art gets stronger; he brings more subtlety and delicacy to the characters' personalities.  Now, Arollado's graphical storytelling engages the reader to give more consideration to the characters' motivations and goals; ignore nothing in this storytelling.

I heartily recommend Grey, and there is still time for you, dear readers, to get in on Grey's intriguing ground floor.

I READS YOU RECOMMENDS:  Fans of manga-inspired comic books and of good science fiction comic books will want to read Grey.


Get Grey at comiXology or here: https://www.comixology.com/Grey/comics-publisher/20880-0