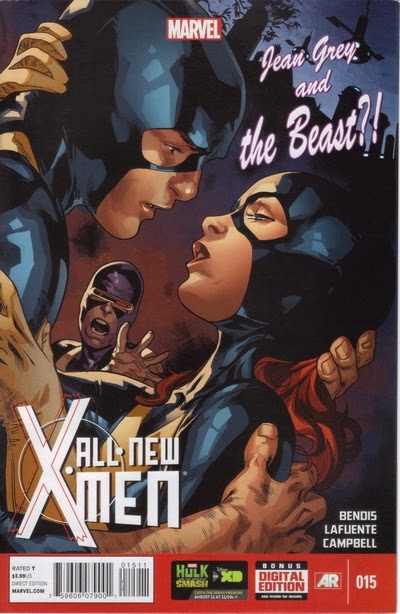 By now, some of you, dark readers, know the premise of All-New X-Men, one of the titles born out of Marvel Comics’ Marvel NOW initiative.  At the Jean Grey School for Higher Learning, Storm, Wolverine, Beast, Iceman, and Kitty Pryde try to keep Professor Charles Xavier’s dream alive.  Meanwhile, Cyclops/Scott Summers, one of the original X-Men, has become a highly controversial figure, and he is now the public face of a new mutant revolution.

In a desperate bid to stop Cyclops from triggering a mutant apocalypse, Beast/Hank McCoy (who was dying at one point) goes back in time.  He brings the original X-Men:  Cyclops, Jean Grey, Iceman, Beast, and Angel, back with him.  Beast hopes that what they learn in his present/their future, they can take back to their time and keep a dark future from happening.  The teens decide to stay and fix what is wrong… now.

All-New X-Men #15 is a stand-alone issue that focuses on the original X-Men.  The story opens with the return of Rachel Grey to the mansion.  Is she ready for the original Jean Grey?  More complications arise for young Jean during a vehicle repair session with the adult Beast.  What she inadvertently learns from him could change the group dynamics of the original X-Men.

Meanwhile, young Scott and Bobby (Iceman) decide to “blow this popsicle stand.”  They basically run away from home/the school to be with real people and to do things that real teenagers do.  They end up at a street market, where they make new friends.  But will their mutant powers get in the way?

I am not quite at the point where I want to call Brian Michael Bendis one of the all-time great X-Men writers.  That would put him (in my estimation) with Stan Lee, Roy Thomas, Chris Claremont, John Byrne, and Grant Morrison.  But he’s getting close.

Posted by Leroy Douresseaux at 5:35 AM