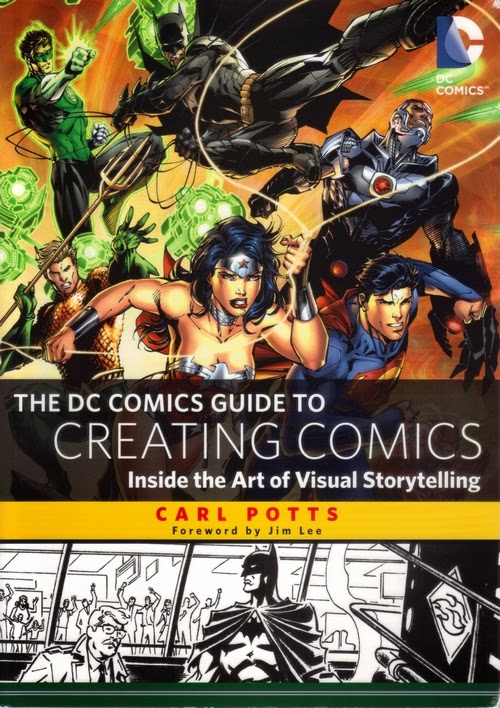 Potts may be best known for working with numerous comic book artists early in their career, including Jon Bogdanove, Whilce Portacio, and Scott Williams, among many.  Potts also helped Jim Lee and Art Adams break into the comics industry.  Potts’ work as an editor and his work with young comic book creators make him the perfect author for books about creating comics.

With such a pedigree and with so many accomplishments, it should be no surprise that The DC Comics Guide to Creating Comics is not a book for beginners.  It is not that this book is highly technical; it actually goes into great detail about the art and craft of creating comics.  It discusses everything from the goals and principles of “visual sequential storytelling” to how a creator can affect the comics reader’s experience.

To me, at least, the people who can get the most out of The DC Comics Guide to Creating Comics are writers and artists, especially the latter, who have created comics.  Those writers and artists who have some professional experience or who have produced comic books (even if they have had to self-publish) will get the most out of this because they already either already understand comics (either by theory or practice) or have attempted to make comics.

The DC Comics Guide to Creating Comics is generously illustrated book, but this is not about pretty pictures and slick comic book art.  It is about teaching and guiding.  Potts makes his points with covers, whole pages, thumbnails, pencils, inks, details from larger pieces, etc.  I think my favorite part of the book is Chapter Twelve: Watching the Pros Work.  Three artists:  Whilce Portacio, Bill Reinhold, and Phil Jimenez take the same three-page script and provide breakdowns or thumbnails and then, turn those into pencil art.  Seeing how three veteran artists interpret the same script in ways that are both graphically and visually similar and different is a joy for a comic book fan and will likely be of use to someone wanting to learn the DC Comics’ way of drawing comic books.

So readers wanting to learn more about creating superhero comic books will want The DC Comics Guide to Creating Comics: Inside the Art of Visual Storytelling.  Carl Potts is a good teacher, and this is one good looking book.


Posted by Leroy Douresseaux at 7:30 AM