I Reads You Review: BATMAN #21 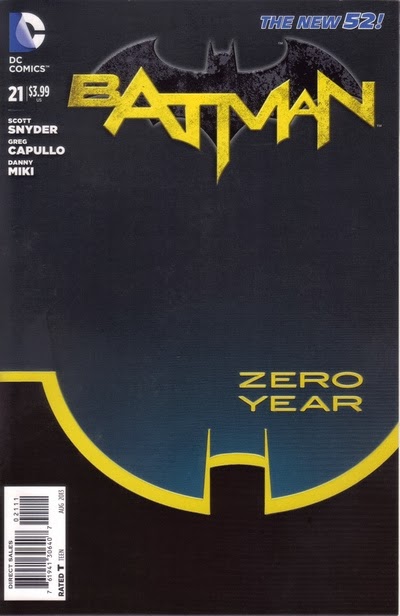 The latest Batman event story is “Zero Year.”  Written by Scott Snyder and drawn by Greg Capullo, the 10-issue story is currently running through the ongoing Batman title.

Batman #21 (Zero Year – Secret City: Part One) opens six years ago, which I’m assuming is a time period occurring before The New 52.  Batman looks cool on a motorcycle.  Then, the story moves to a period five months earlier than that.  Then, there are flashbacks to Bruce Wayne’s youth.  “Secret City,” which seems unhinged in time, features the Red Hood, Alfred Pennyworth, Dr. Thomas Wayne, Philip Kane (Bruce’s maternal uncle, whom obviously irritates Alfred), and a surprise appearance from a classic member of Batman’s rogues gallery.  See ya’ next issue.

Wow!  I’m ready to read more.  Snyder borrows elements (as far as I can tell) from Batman stories written by Frank Miller, Grant Morrison, and novelist Tracy Hickman.  He turns that into an intriguing tale of Batman’s early campaign against crime in Gotham City.  I think Uncle Philip is in this story to add a tragic twist, and for that Snyder has made him well suited for betrayal and blood.  One of my favorite things about this story is how Snyder portrays young Bruce Wayne as an explorer of Gotham.  It’s too cute, and it tugs at the heart.

Another favorite thing about Batman #21 is Greg Capullo’s quirky pencils, which under Danny Miki’s inks, creates a Batman milieu that is timeless.  The art seems inspired by the entire graphical landscape of Batman, from the 1960s to the early 21st century.  FCO Plascenia’s coloring captures lovely autumnal colors in a way that one would think not possible for a comic book (and certainly not a superhero comic book), and the coloring gives Gotham City character and personality.  I’m ready for more.

Back-up story:  Bruce Wayne: Where the Hell Did he Learn to Drive?!

“Bruce Wayne: Where the Hell Did he Learn to Drive?!” is a back-up short comic that presents a vignette of the life of 19-year-old Bruce Wayne.  I guess that you can’t tell a tale of early Batman, if you don’t also show how Bruce got to Batman.  I will assume that Bruce is in Rio do Janeiro (the story’s setting) to train for his future efforts in Gotham.  This is a clever story that hints at the future “Dark Knight,” especially Frank Miller’s Clint Eastwood-esque take on the character.  Rafael Albuquerque’s art is nice.

Posted by Leroy Douresseaux at 7:18 AM