Book Review: HELP FOR THE HAUNTED 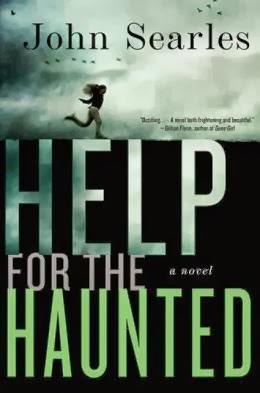 I have not read many prose novels this year, but I can honestly say that the best one that I have read (thus far) is Help for the Haunted, the 2013 novel by author John Searles.  Searles is a television book critic, magazine editor, and essayist, in addition to being the author of such novels as Boy Still Missing and Strange but True.  A coming-of-age tale and ghost story of sorts, Help for the Haunted follows a teen girl forced to unravel the mystery surrounding both her parents’ past and their brutal murder.

Fifteen-year-old Sylvie Mason isn’t sure who murdered her parents that winter night.  As of now, the police have in custody, Albert Lynch, a troubled man who had sought help from Sylvie’s parents, Rose and Sylvester Mason.  The adult Masons were known for providing “help for the haunted,” those people troubled by the supernatural – possessions, ghosts, and those sorts of things.

Still, Sylvie is determined to keep looking until she knows the truth of that night when she found her parents dead in a small church.  She needs to know the identity of the person she saw standing near their bodies in the darkness, but with certainty.  As Sylvie pursues the mystery, she slowly moves closer to the knowledge of what occurred that night.  Finding that knowledge, however, means she must not only dig deep into each of her parents’ past, but she must also relive the previous few years of her life with her parents and his sister, also named Rose.  As Sylvie comes to terms with her family’s past, she uncovers secrets that have haunted them for years, including young Rose’s secrets.  Did Sylvie’s sister murder her own parents?

Help for the Haunted is one of those novels that is “part” a lot of things.  It is part mystery, part ghost story, and part modern fiction.  Author John Searles tells the story from Sylvie Mason’s point of view or through Sylvie.  Thus, in a way, Help for the Haunted is like a young adult novel, but told as an adult story.

I think what Searles is actually doing is using two familiar genres:  the whodunit and the ghost story, to tell a story that delves into the highly-complex circulation systems that make up modern family dysfunction and into the hot mess that is family history.  In telling this story, Searles will withhold information, and then, in the next literary breath break open family secrets like an anxious bull in ye olde proverbial china shop.

This is superlative storytelling, but Searles also gives us a golden cherry on top – a great lead character in Sylvie Mason.  Searles puts us right inside Sylvie – head and heart, body and soul.  She is the classic plucky kid, but also the modern bullied teen girl who turns out to be a fortress of solitude, and, in the end, a lioness with a heart of gold.  We tag along with Sylvie for an amazing journey slash guessing-game that is one of the great reads of 2013, and it has a killer last act and ending.  Help for the Haunted is John Searles’ help for the bored reader.

Posted by Leroy Douresseaux at 4:34 AM