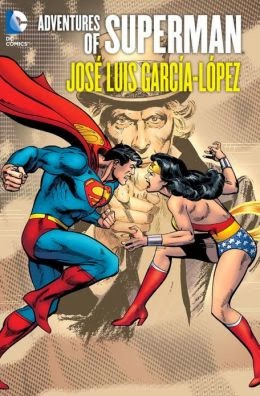 In Superman #347 (May 1980), Superman takes on an alien phantom whose antics are placing Metropolis and the surrounding region in danger of a nuclear disaster.  It is a nice story with a sad ending, but what is more memorable about this particular Superman comic book is the art for the story, penciled and inked by José Luis García-López.

On Pages 4 and 5 (of the story), García-López depicts Superman having dinner with Lois Lane at a rooftop restaurant.  As usual, García-López shows off his knowledge of human anatomy in the physique of Superman and in the lithe, athletic figure of Lois Lane.  However, on those two pages, García-López’s compositions conceive Metropolis Towers Restaurant’s settings, interiors, and backdrops with elegance and flair.  This comic book art looks like pages that could be from an architectural or interior design magazine.  It is simply a testament to García-López’s skill, and such an artist deserves a special showcase.

Earlier this year, DC Comics published Adventures of Superman: José Luis García-López.  This book is part of a line of hardcover, full-color books that collect the work of influential comic book artists on iconic DC Comics characters, in particular Superman and Batman.  Previous books in the series include Legends of the Dark Knight: Jim Aparo and Adventures of Superman: Gil Kane.

José Luis García-López was born in Spain in 1948 and eventually immigrated to Argentina with his parents.  He began his comic book career there at the age of 13 and also studied at Escuela Panamericana de Arte.  He broke into American comic books in the late 1960s with Charlton Comics and worked for the publisher into the early 1970s.  After moving to New York City in 1974, García-López met DC Comics editor Joe Orlando, and his first work for DC Comics began appearing in 1975.

The first time I really paid attention to José Luis García-López was when I found an issue of Amazing Heroes (the former Fantagraphics Books magazine that published news, features, and interviews about superhero comic books) that focused on him.  The article talked about his work on the comic book series, Atari Force (1984), and his then upcoming work on the hit 1980s New Teen Titans (Vol. 2, #7-11; 1985).  The article included images of García-López’s pencil art before it was inked.  I learned from the article that García-López was a master of figure drawing in comic books.

That is indeed true.  For the last 25 years, many comic book artists have presented the human figure by over-delineating musculature with cross-hatching and detailed line work.  That yields either unimaginative photo-realistic art or characters (especially male characters) in which every muscle is squeezed and pumped until the characters look like freakish bodybuilders.  García-López mastered the human figure through cartooning, expression, and abstraction.  The result is dynamic figure drawing that best captures the magic and wonder evoked by comic book characters, especially superheroes.

In splash and half-splash pages and with big panels, modern comic book artists can show off intricate pencils, detailed backgrounds, and figure drawing that catches every nook and cranny of the human form.  In this book, José Luis García-López, the master, shows off the proficiency of his ability to cartoon the human figure in even the smallest panels just as well as he can in double-page spreads, splash pages, and assorted big panels.

In the first six stories reprinted herein, García-López blends the page design style of Neal Adams with the aesthetics of Steve Ditko to create stylish page design cramped and dotted with panels.  Still, the physicality of Superman and guest-stars, such as Supergirl and Solomon Grundy, shines through everything.  Superman’s muscular form takes on the traits of dancer’s lithe body, as the Man of Steel flexes, fights, and flies from one panel to another.  Because García-López can pull this off, he creates a sense of movement in his pages, connecting not just each panel to another, but also each page to another.  Looking at the art, I thought I was watching a tiny Superman literally flying through the story and acting as the storytelling vehicle.

The masterstroke of Adventures of Superman: José Luis García-López is its reprint of All-New Collector’s Edition #C-54, a 1978, oversized comic book that pitted Superman and Wonder Woman against each other, before finally uniting to fight Axis evil.  The clean inks by Dan Adkins give García-López’s pencils a Neo-Classical quality, but retains the “New York slick” style that fits this World War II era story.

This book will also afford readers an opportunity to read stories written by a number of good comic book writers, especially the now underappreciated Gerry Conway.  His “Superman vs. Wonder Woman” tale is spectacular.  The feud between the two heroes and their eventual resolution makes sense within the context of the story and also corresponds with real world issues that still vex us today.

Somehow, my Bin boss was able to talk DC Comics into giving me a copy of Adventures of Superman: José Luis García-López.  I don’t owe them a good review for giving me this book, but I’m going to give them one anyway.  This archival presentation is the kind of book that a great comic book artist like José Luis García-López not only deserves, but has also earned.  It is also indicative of the usual high quality of DC Comics’ hardcover reprint books.

Posted by Leroy Douresseaux at 4:25 AM