Review: TIGER AND BUNNY: The Beginning Side A 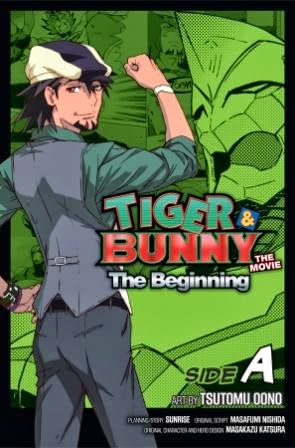 TIGER & BUNNY: THE BEGINNING SIDE A
VIZ MEDIA – @VIZMedia

Gekijō-ban Tiger & Bunny – The Beginning is a 2012 film based on Tiger & Bunny, the science fiction and superhero anime television series.  Produced by Japanese animation studio, Sunrise, Tiger & Bunny ran for 25 episodes in 2011.

Tiger & Bunny takes place in a world where 45 years earlier, super-powered humans, known as NEXT, started appearing.  Some of them fight crime as superheroes in Stern Bild City (a re-imagined version of New York City).  They promote their corporate sponsors while appearing on the hit television show, HERO TV.  Each season, the superheroes compete to be named the “King of Heroes.”

Early in Tiger & Bunny: The Beginning Side A, the Justice Bureau approves Barnaby Brooks, Jr. as a new superhero.  Meanwhile, Kotetsu T. Kaburagi, who is the veteran superhero, Wild Tiger, begins his day.  Kotetsu makes a promise to his daughter, Kaede, but will he be able to keep it when a menace attacks the city.

That attack will change Kotetsu’s life, because it leads him to a new employer.  The new employer, Apollon Media, is about to introduce Kotetsu to Barnaby Brooks, Jr. whether he wants to meet him or not.

Posted by Leroy Douresseaux at 7:09 AM