I Reads You Review: BATMAN #22 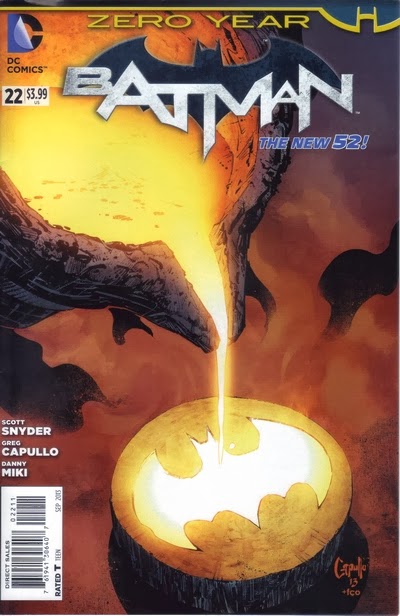 Dear Scott Snyder and Greg Capullo,
Apparently, your “Zero Year,” a most pleasing, is what I wanted Grant Morrison’s Batman to be.  Of course, I enjoyed Mr. Morrison’s Batman stories, but I always thought that they should somehow be... better?  His Batman and Robin series started with such hope and promise, but quickly went flat, whereas your own “Zero Year,” seems to be on an upward trajectory, as they say. We’ll see...

The latest Batman event storyline is “Zero Year.”  Written by Scott Snyder and drawn by Greg Capullo, this 10-issue story is currently running through the ongoing, eponymous Batman series.  And thank you, DC Comics, for not making it a crossover with other Bat-titles and keeping the publication schedule pure.

Batman #22 (Zero Year – Secret City: Part Two) opens with Bruce Wayne facing down the Red Hood and his gang.  He discovers a shocking connection to the criminal and to Wayne Enterprises, but Bruce doesn’t know the half of it.  Meanwhile, a flashback to the past shows little Bruce gone cave exploring.  And adult Bruce has a spat with his butler, Alfred Pennyworth.  See ya’ next issue.

As I said in my review of Batman #22:  Wow!  I’m ready to read more.  Snyder is killin’ it, y’all.  I so don’t look forward to a refraction period, so I hope this story arc stays strong.  Style aside, Greg Capullo is doing some tremendous storytelling.  “Tremendous,” did I say?  I guess you can tell that I am enjoying this.  But I look forward to enjoying this, almost as much as I look forward to each new appearance of Love and Rockets – my favorite comic book.

Bruce Wayne: “That One Time”

This issue’s Bruce Wayne flashback story is “That One Time.”  It takes place when Bruce is 21.  He’s trapped in a hole of some kind.  The theme is “doing the impossible.”  I like some of what artist Rafael Albuquerque is doing here.  The rest of the art serves the story, so I won’t complain.

Artists, writers, and other creative types will find some words of wisdom in this story.  They may even find it inspirational.

Posted by Leroy Douresseaux at 5:01 AM