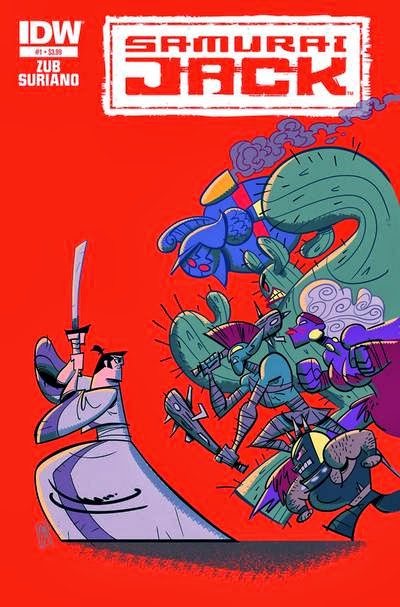 “Samurai Jack and the Threads of Time”

I’m reading the first issue of the new Samurai Jack comic book from IDW Publishing.  The first time a villain appears in the story, I can hear the late, great Don Messick’s voice in my head as I read the villain’s dialogue.  Messick was a voice actor known for his association with television animation giant, Hanna-Barbera, performing on such series as Jonny Quest and The Huckleberry Hound Show, among many.  Although he died several years before Samurai Jack debuted on television, Messick, I think, would have fit in as a voice performer on the series.

Samurai Jack is an animated series originally broadcast on Cartoon Network from 2001 to 2004 for a total of 52 episodes.  This television series tells the story of a legendary samurai, known as “Jack,” who is transported to a dystopian, futuristic Earth ruled by the tyrannical, shape-shifting, demonic wizard Aku.  Jack wanders this future, trying to find a method by which he can travel back in time to the era in which he belongs, Feudal Japan, where he plans to defeat Aku, another denizen of Japan’s past.

Now, Samurai Jack returns as a new five-issue comic book miniseries from IDW Publishing.  IDW is partnering with Cartoon Network (CN) to produce original comic books based on CN’s animated properties.  Written by Jim Zub and drawn by Andy Suriano, Samurai Jack is not merely an adaptation of the series.  This comic book IS Samurai Jack.

As Samurai Jack #1 opens, Jack begins his latest quest to find a way back to Feudal Japan.  That involves a trip across a storm-swept, insect-infested desert to seek Soule the Seer.  From Soule, Jack learns of the Threads of Time.  If Jack can obtain these threads, he can rewind the Rope of Eons and therefore, rewind himself home.  But to get the first thread, this samurai must become a gladiator.

Of all the comic books that have debuted this year, Samurai Jack is the purest of them all.  It is so free of pretension, yet is still bright and imaginative.  It is so true to its source material, the Primetime Emmy-winning, Samurai Jack, that it does not seem like a mere licensed comic book, but rather a genuine continuation of the original story.

There are two things that really stand out about writer Jim Zub’s story.  First, Zub maintains the sparkling wit and smart humor that marked the television series.  Secondly, he gives Jack personality.  Thus, the character seems like a… well, a character and not just some corporate intellectual property doing the synergistic thing.  Instead, Jack is an approachable dude; sure he can kick some butt, but the character seems approachable.

Artist Andy Suriano, a character designer on the original Samurai Jack cartoon, transforms the graphic sensibilities of the animated series into the graphical storytelling aspects of a comic book.  Suriano does not draw everything in painstaking (and painful-to-look-at) detail.  The simple shapes and abstract features of cartooning figures, sets, and background details are just as effective at establishing plot, character, and setting as the pseudo-realism of much comic book art.

Posted by Leroy Douresseaux at 8:55 AM