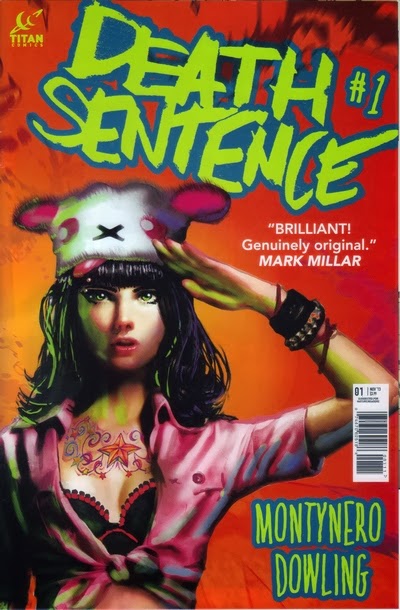 Sometimes, first impressions are not everything.  I often find that out when I get a copy of a comic book for review.  I start reading, and immediately dislike it.  I dread the thought of writing a review that my dark side will fill with sarcastic and mean-spirited comments.  Then, something good happens.  I find that the story starts to come together, and I like that comic book much more than I did in the beginning.

That happened with Death Sentence, a new six-issue comic book miniseries from Titan Comics.  The series is written by Montynero, a writer and artist of computer games, and drawn by Mike Dowling, a comic book artist who has contributed to 2000AD and Mark Millar’s CLiNT.  Montynero also provides the covers for Death Sentence.

Death Sentence #1 introduces the sexually-transmitted G+ Virus.  Catch it and you have six months to live, and there is currently no cure or effective treatment for the virus.  Well, there is a plus side to having this virus.  It increases the sex drive, and the infected gain enhanced physical attributes.  They become smarter, stronger, or faster, and exhibit unusual or extra-normal abilities – meaning they gain superpowers.

Meet the newest G+ Virus victims:  graphic designer, Verity Fette; failing and flailing indie rocker, Danny Waissel AKA “Weasel;” and comedian and media personality, Monty.  Verity and Weasel are confused about their death sentence, while Monty sees it as an opportunity to diversify his booty call choices.  None of the three, however, realize that the spectre of death isn’t the only thing chasing them.

I wanted not to like this.  Mike Dowling’s art has that idealized gritty realism upon which Vertigo seems to be choking.  The concept and story seem like a gummy stew made out of Warren Ellis, Garth Ennis, Mark Millar, and Grant Morrison’s leftovers.  [The cover of Death Sentence #1 features a positive blurb from Millar.]  But, as I wrote earlier, first impressions aren’t everything, are they?

Dowling’s art expertly captures the running-on-fumes lives of Verity and Weasel, while giving Monty’s lecherous ways an engaging, humorous bent.  Montynero offers two intriguing characters in Verity and Weasel.  Verity’s predicament is surprisingly poignant.  I find something alluring in watching the train wreck that is Weasel.  He might seem like the kind of rock star that Miley Cyrus is destined to eventually date, not realizing that he is also destined to strangle her after a weekend bender.  But Weasel is not that bad.  He’s just a fool, and in fiction, fools can be fun.

Where is Montynero going with the character of Monty?  My inquiring mind wants to know.  I want to see where Death Sentence is going.  People looking for superhero comic books that don’t involve gimmick covers, but do involve intriguing concepts will want Death Sentence.

Posted by Leroy Douresseaux at 8:48 AM