Review: TIGER AND BUNNY: The Beginning Side B 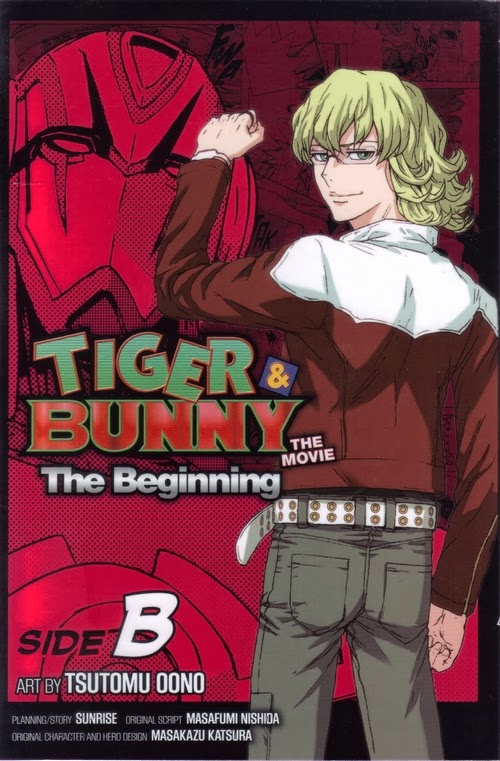 TIGER & BUNNY: THE BEGINNING SIDE B
VIZ MEDIA – @VIZMedia

Tiger & Bunny takes place in a world where 45 years earlier, super-powered humans, known as NEXT, started appearing.  Some of them fight crime as superheroes in Stern Bild City (a re-imagined version of New York City).  They promote their corporate sponsors while appearing on the hit television show, HERO TV.  Each season, the superheroes compete to be named the “King of Heroes.”  The series focuses on the mismatched duo of Barnaby Brooks, Jr., a new superhero, and Kotetsu T. Kaburagi, the veteran superhero, Wild Tiger.

As Tiger & Bunny: The Beginning Side B opens, Kotetsu’s employer, Apollon Media, gives him new instructions.  In light of the recent near disaster (as depicted in Side A), Kotetsu is expected to act as Barnaby’s foil, as well as to offer him encouragement.  Kotetsu tricks his fellow superheroes into throwing a welcoming party for Bunny, his pet name for Barnaby.  The party ends, however, when the speedy Robin Baxter gets his hands on the Statue of Justice.

The Tiger & Bunny manga is quite similar to American superhero comic books – closer than most manga I have ever read.  It resembles DC Comics’ 1980s Justice League comic book series, which was put a humorous bent on the venerable Justice League franchise.

Virtually the entirety of Tiger & Bunny: The Beginning Side B is one long, extended chase/action sequence with comedy, lite death-defying moments, and some cleverness on the part of both heroes and villain.  I enjoyed reading it; in fact, by the time I got to the end, I really wanted more.  Maybe, it is a superhero thing with me, but I like this.  I am curious to know if other superhero fans will like it.

Posted by Leroy Douresseaux at 7:29 AM