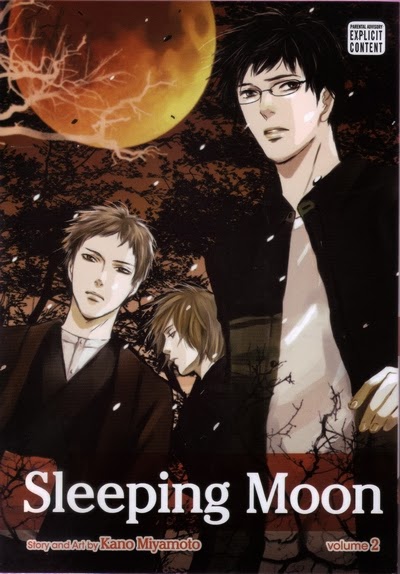 Sometimes I encounter a situation in which the second volume of a manga series is so much better than the first volume, even when that debut volume is itself good.  That recently happened again, and I am totally wowed by Sleeping Moon Volume 2.

Sleeping Moon introduces 27-year-old college student-teacher, Akihiko Odagawa.  He returns to his family’s ancestral home in order to solve the mystery of a rumored curse that brings early death to the male descendants in his lineage, the Sakaki Family.  There, he meets his Aunt Akiko and her two children, twin brother and sister, Ren and Eri. While in the home, Akihiko experiences a time slip that takes him back 100 years in the past to Japan’s Meiji Period, where he meets student, Eitarou Shinjou.  The two men form a deep emotional bond as they bridge time to unravel a family curse?

As Sleeping Moon, Vol. 2 (Chapters 6 to 9) opens, Akihiko surrenders to his cousin Ren.  Their relationship, which has already turned sexual, grows more personal and intimate.  Akihiko, however, cannot stop thinking about Eitarou, the relative that he visits when he can time travel at night.

Eitarou and Akihiko grow closer, and together seek the truth behind the curse on their family.  Its origins are buried in an incident involving the Shinjou Family, which was tied to the Sakakis.  What went wrong or what happened?  But the nearer the two men from different eras get to the truth, the more Akihiko’s body seems to fade away.

No wonder so many readers seem to love these love stories that involve time travel.  They can make for great reading, and the Sleeping Moon manga is a terrific read.  Correction:  Sleeping Moon Volume 2 is a great read.

After reading Vol. 1, I thought that Sleeping Moon had potential.  Its supernatural elements were creepy, and the romance was strong; however, as I read it, I thought that creator Kano Miyamoto was being cool and deliberate about passions and revelations.  With the four chapters that make up the second half of the story, Miyamoto seems to unleash a torrent of passion, longing, and rage.

OMG!  The revenge-ghost story part of Sleeping Moon suddenly becomes spine-tingling J-Horror.  There were times when I thought the bad spirits would emerge from the page and contaminate me.  I really invested myself in wanting a resolution to the curse.

Akihiko, Ren, and Eitarou form one of the best love triangles that I have ever found in a comic book from any country.  That is another element of Sleeping Moon in which I heavily invested my emotions.  I wanted Akihiko to be with Eitarou, but at the same time, I saw that Akihiko and Ren made a great couple – regardless of the incestuous nature of their love.  This is one of those examples in which the reader will be happy about the outcome, but still yearn for the other outcome.

This is one of my favorite manga and comic books of the year.  There is a nice epilogue, entitled “Waning Moon,” and it is a near perfect ending, but it just reminds you that the good time you had reading Sleeping Moon is about to end.

Posted by Leroy Douresseaux at 6:18 AM